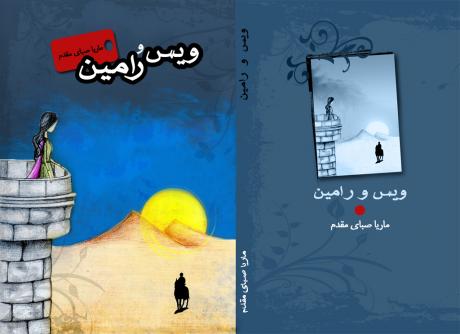 There is Persian Literature, there is love, and then there is Vis, who stands out amongst all women in Persian literature. Vis is the main character in a love story from two thousand years ago, “Vis o Ramin”. All characters in the story come to life only in her presence.   Here is a woman who ignores wealth, name, and position and makes an eternal commitment to love and all that comes with it: shame, betrayal, longing, pain, desire… Her name and her story travel from one end of the empire to the other:
“The rivers murmur my story…”, she says.

She is threatened, beaten, and imprisoned. And if that is not enough, her husband sets up a trap to burn her alive in public. She bears it all and more.
Vis is the eternal lover; one who finds love and takes an oath to nothing else. Wealth, virtue, name and all that lose color in the face of love.

This, perhaps, is not acceptable for a woman when regarded by those who feel they are in a position of moral authority. Nezami, who supposedly used “Vis o Ramin” as a model to write “Khosrow va Shirin”, calls Vis infamous, Zakani discourages women from reading “Vis o Ramin”, and later Dastgerdi wages a war against the book by calling it “the enemy of Iranian honor and morality”.

These views were not shared by ordinary people who lived at Gurgani’s time. They loved the story and regarded it highly.  Gurgani himself stated at the beginning of his book that story was loved by people in Iran. There is also a Japanese document from 800 years ago where an Iranian traveler writes two verses of “Vis o Ramin” for a Japanese monk who was traveling from China as a keepsake. This evidence indicates that the story must have been very popular among Iranians to knew it by heart and recited it for others in a distant land.

“Vis o Ramin” is an ancient Persian love story from 2000 years ago. The story is believed to belong to the Parthian period and is written in poetry by Fakhraddin Gurgani about 1000 years ago. Gurgani is a pioneer in writing love stories in poetry and his style was largely emulated by later poets such as Nezami. “Vis o Ramin” is one of the most influential ancient love stories. The story is about a love affair between two young lovers who sacrifice name, family, social obligations and everything else to be with each other. It was loved and admired by people long after it was written.

The story reveals a great deal about a period in Iranian history about which very little is known. The traditions and customs of those times do not necessarily match those of our times. The story talks about marriage of sister and brother –common amongst the ruling class at the time. This is something that is loathed for some centuries, but the story talks about a different time, different people, and different traditions from ours.

There are also the subject and the main character of the book that create a stir. The story is about an earthly love, one that is all about desire. This is very different from the notion of love that became popular in later centuries. The love that has a connection to the heavens and almighty was not known in ancient Iran. In all ancient Iranian love stories, love is very much the love based on the attraction of two people of opposite sex.

There are also the strong hints of Zoroastrianism which some people later interpreted as “worshiping fire”.

All of these factors could have played a role in why the story has become less and less known over time and has been left out of educational curriculum despite its literary merits, historical value, and beauty.

There is also Vis, a woman who takes conventions and traditions for nothing when she enters the realm of love. She is a married woman in a sense. She is forced into a marriage with her father’s killer who is an impotent man. For a woman who refuses to be anything but passive (unlike Leili in Leili va Majnoon) or to trade love for becoming the queen (Shirin in Khosrow va Shirin) and who risks everything for an anything-but-a-virtuous man (young, beautiful, and vivacious Ramin), there is a price to pay.

In this sense, Vis is unique. She dares to fall in love with her husband’s brother for no other motive than love. She does not expect anything from Ramin other than loyalty. She is the Queen of the empire, she has the key to the King’s treasury, she has everyone under her order, and she ignores it all to be with Ramin. When the King, angry and frustrated by her insistence on her love for Ramin, expels her from the palace, she surrenders the treasury keys and leaves immediately and happily.

And that is why Vis occupies a unique place in Persian literature. There is simply no one like her; no commitment like hers, and no suffering like hers. Her story has a happy ending, one that is different from most Iranian stories in the Islamic era where the fate of the lovers is often a sad one.

Some researchers have examined the story from the point of view of folklore, history, literature, and provided the plot. A great deal of Gurgani’s book is on description of the lovers’ inner conflicts, doubts, longing, desire, and joy and celebrations; these are missing in summarized plots presented so far.

I was concerned that the story will soon be forgotten as committing to reading 400 pages of poetry may be daunting for many. I converted the book to prose and summarized it to make it more accessible to all. The book, published by Naghmah-yi Zendegi in Tehran, starts with an introduction to the author’s motivation and an account of the importance of the book and Gurgani’s work. The story is a direct conversion from poetry to prose in a summary form. It provides a brief introduction to this literary masterpiece for many people who may not enjoy poetry or may simply not have the necessary skills to read poetry, yet who may still enjoy a beautiful love story.