A Tribute To Professor Seyhoun 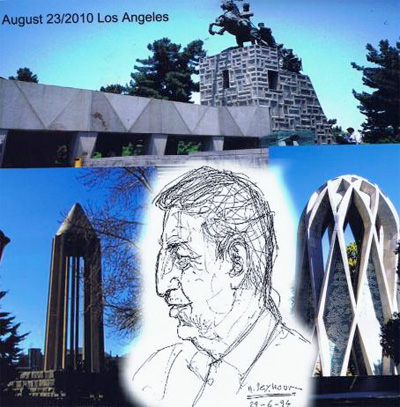 Thirty-five years ago, I used to go to the Lincoln Library, on Vozara Street, every Wednesday afternoon.  The icing on the cake was a visit to the Seyhoun Gallery few steps away where I got to see paintings, and sometimes painters.  I would stand there, look at each painting and daydream.  You see, I was just a teenager!

What I didn’t know at the time was the connection of that gallery to the man I later learned to be the best known Iranian architect, Houshang Seyhoun, the designer of so many buildings and monuments throughout Iran.

Last night I had the privilege to attend an event presented by the Society of Iranian Architects and Planners in tribute to Professor Houshang Seyhoun at the Bing Theater of Los Angeles County Museum of Art.

I had asked a friend if we should go there earlier than the start of the program to stand in line.  But she had replied that the theater has 600 seats and there should not be any problem finding a seat at 6 o’clock on a weeknight.  What she perhaps did not take into account was the popularity of Professor Seyhoun.  The hall was filled within minutes after the doors were opened and many were unable to come in.

The celebration was like a variety show filled with live music, documentary films, lectures, announcements, and congratulatory messages from dignitaries, friends and family members topped with his graceful presence on stage.  What better way to end the program than to see and hear him in person, standing there tall and dignified at 90.