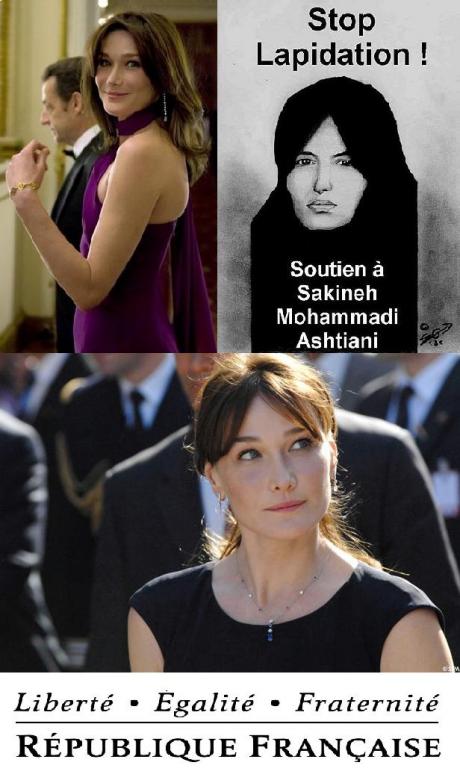 Condemned to be buried alive, and then stoned to death! Your beautiful face, reduced to a pulp! Your eyes full of sorrow and dignity, your forehead, your mind, your soul, transformed into a target for the stone throwers, exploded, pulverized, in shreds! Horror and consternation! This revoltingly nightmarish image, this vision that terrifies us and seems to come from a long ago age, this unbelievable torture that is on the very verge of becoming reality. For obscure reasons, in cold rage, people who are like you and me have decided so, Sakineh. People who claim the right to the power of life and death over those who refuse to obey them.

Having learned of the sentence pronounced against you, how can one possibly remain silent? What is at real risk of happening to you will profoundly harm all women, all children, all those who are moved by human feeling. And even worse, you would not be the only one who risks being subject to this dreadful execution. I cannot see any good that may come of this macabre ceremony, whatever the legal justifications supplied.

Everything within me refuses to accept this. The Iranian people are among the most ancient and remarkable nations of the planet. I do not understand how the heirs of a great civilization built upon tolerance and refinement can be unfaithful to this millennial heritage.

Your judges must know, Sakineh, your name has become a symbol the world over. Let us hope they may understand that, no matter what the time or the place, they shall never be able to wash their hands of such a crime.

I am proud to live in a country that has abolished the death penalty. For a long while, it was an element of our law, and I can tell you that this abolition was a democratic victory, one that was very important for all of our people. What if this victory became yours as well? What if the Iranian nation turned its back on this barbarian practice?

I pray that your country’s justice may find the way to prove clement in your case and in the cases of all the other victims who risk undergoing the same torture. In France, school children learn that mercy is the greatest virtue of those who govern.

In the depths of your cell, know that my husband will plead your cause unfailingly and that France will not abandon you.

English Documentary of Carla Bruni Sarkozy who is a Model and Singer by Profession :

Carla Bruni – Nobody knows you when you’re down and out:

Campaign In Support of AIDS Victimes ( Carla Bruni’s Own Brother died from the disease):