Do we want life to go on in Tehran? 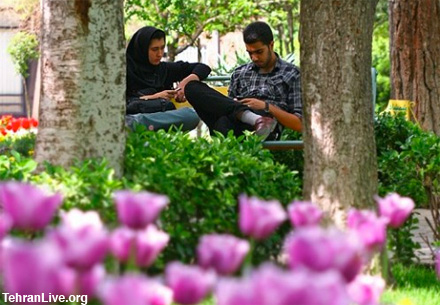 These days, when I talk to my friends in Iran, hardly anyone, even the most politically active, talks about politics anymore. I’m certainly not claiming that my friends are a representative of the entire Iranian population – they certainly are not. But it was at first somehow disappointing to hear them disregard the latest political news the way they did. When just months ago, they were the ones filling me in on things I might have missed. Now, even when I bring up things like “did you read Mousavi’s latest letter?” or “did you hear about so and so’s outrageous prison sentence?” They are quick to change the subject.

When I ask them about their schools, they tell me that most students are back to trying to catch up on their school work, admissions, master’s entrance exam, etc, etc. There is very little talk of politics.

And yet, you hear daily of new arrests, new prison sentences, new letters from prison. Many of those on hunger strike are students. These direct threats and hurdles are also a daily reality for a part of Iranian society that has continued the fight. As Mohammad Nourizad said in his interview: “these are realities we are living amidst.”

It is not that my friends are indifferent towards these realities. But it was somehow disappointing for me that they do not pursue them with the same vigor they did just a few months ago. My own unease about this made me uneasy, so I had to ponder it a little more.

These feelings are exasperated when I meet seemingly reasonable Iranians who insist that life shouldn’t go back to normal in Tehran, that things are still in a state of chaos and people are organizing against the establishment 24/7 ”until the regims ie toppled”, “Khamenei stands trial” and “freedom is achieved”. “We can’t take anymore of this” they insist and “the youth of Iran will get us freedom soon.”

Maybe they mean well, but as someone who was one of those “youth” not long ago, I feel these words are said self-servingly. I am more certain of this when I tell them about my observation: that most of my friends have indeed gone back to their usual lives … and it angers them.

I realize that following the news on Iran for many on the outside, is a break from a life of daily calm, and a step into chaos. For my friends, this chaos is everyday reality. The latest policy change, university chancellor change, ban, sanction, etc, etc is what they live with. For many outside, finding out about these things, no matter how painful or difficult, has little connection to the physical, tangible reality of their everyday lives (although it has extreme repercussions for our mental, spiritual and psychological lives – but that’s another story). I want to be up to date with news in Iran, but my immediate life – work, school, bills, etc – would be no different whether I did or didn’t.

My friends don’t have that luxury.

In essence, maybe things have gone back to the way they always were: our people don’t forget. But rather, they’ve become experts at carrying on this heavy baggage, while simultaneously getting on with their lives. It is a painful art form that maybe only an Iranian would truly understand. And maybe as someone on the outside, a part of me wants to see them still leave their lives on the back burnder, as they did last June, and only show concern for certain political aspirations? In a very selfish way, is it that this might make me feel better thinking that that would guarantee a “quicker” result? As if my friends are trained soldiers who should be fighting on my behalf, and if ever they stop fighting, or at least not enough, it ticks me off?

Because this is a question I have always come back to when following the student movement, both as an insider, and as someone watching from the outside.

On one level, their activism seems necessary for the greater democratic movement in Iran. On another, I think it is in the best interests of the students themselves to focus on their school work, and not have to pay such a hefty price. Having worked closely with the Muslim Students Association at my school, I know that the students themselves and their families face this dilemma every single day even when the environment was less lethal: do we become more politically active and risk everything? Or mind our own business and just get on with our lives? Do we organize Kadivar’s visit to our school (as we did) or is it too much of a risk? Do we design a poster for Ghods Day or no?

I think that’s a nuance that’s often missing in analysis that comes from the outside however, as here, we just like the students to be active, to applaud them for both pushing the democratic aspirations of the country, and their own generation. From afar, they’re more like a band of warriors than real kids with fears and aspirations whose dreams are often jeopardized or shattered by political activity, and who may be better off personally had they not been active politically. These contradictions and complexities are so real when you deal with them on a day to day basis.

… And it seems to me that for now, life has gone back to “normal” – the painful chaotic normal we are used to – in Tehran. And that is a good thing. People need to live their lives; they need to take trips and go to work and eat at jolly family dinners. For those who know Iran, they know that the events of last June did not come out of thin air. They were a continuum of what had come before. And this story is anything but finished. It is simply somewhere else – somewhere other than it was a year ago. Life goes on in Tehran … but it seems to me that some ill-wishers would rather that it never could.