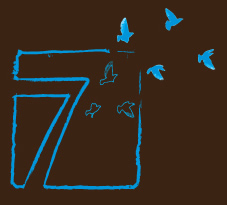 Charged with baseless accusations that even the hero of “My Uncle Napoleon” (Daie jan Napel’un) is incapable of conjuring up, the Yaran, group of seven Baha’i men and women who with the full knowledge of the Government were in charge of the minimum spiritual needs of the 300,00 strong Baha’i Community of Iran, were recently sentenced to twenty years in prison.

They were immediately taken from the showtrial to the Gohardasht Prison where another mock scene was staged: selected inmates, a handful of regime lackeys who according to sarkhat.com would do anything “for a two-day leave or a piece of opium”, received the mothers, grandfather and sons with the vilest vituperations.

Far from leaving the Iranian Baha’is alone or feeling dissensitized by such unabated cases of injustice against Iran and her peoples, let us voice our concern by participating in the twitter campaign (http://twitter.com/free7bahais) and visiting http://free7bahais.ca.

Greek poet Constantine Cavafy in a brillant poem describes how societies create their own version of the barbarians (or the other) to blame them for everything under the sky. His poem “Waiting for the Barbarians” concludes that there never were any barbarians in the first place.  They were only a solution.

Let us seek out real solutions (raah kar) for the Iran of tomorrow. Tweet today.

“WAITING FOR THE BARBARIANS”

-What are we waiting for, assembled in the forum?

The barbarians are due here today.

-Why isn’t anything going on in the senate?
Why are the senators sitting there without legislating?

-Why did our emperor get up so early,
and why is he sitting enthroned at the city’s main gate,
in state, wearing the crown?

Because the barbarians are coming today
and the emperor’s waiting to receive their leader.
He’s even got a scroll to give him,
loaded with titles, with imposing names.

-Why have our two consuls and praetors come out today
wearing their embroidered, their scarlet togas?
Why have they put on bracelets with so many amethysts,
rings sparkling with magnificent emeralds?
Why are they carrying elegant canes
beautifully worked in silver and gold?

-Why don’t our distinguished orators turn up as usual
to make their speeches, say what they have to say?

Because the barbarians are coming today
and they’re bored by rhetoric and public speaking.

-Why this sudden bewilderment, this confusion?
(How serious people’s faces have become.)
Why are the streets and squares emptying so rapidly,
everyone going home lost in thought?

Because night has fallen and the barbarians haven’t come.
And some of our men who have just returned from the border say
there are no barbarians any longer.

Now what’s going to happen to us without barbarians?
Those people were a kind of solution.

PrevPreviousEverything you wanted to know about samovars but were afraid to learn Arabic for
NextCartoon: X or ONext