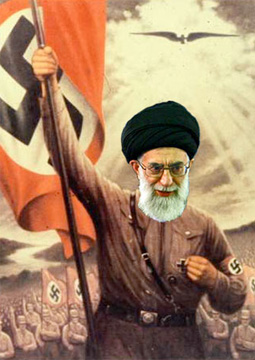 Neoconservatives, Reaganites and other militarily assertive factions in the United States are sometimes accused of thinking it is always 1938 (Britain’s appeasement of Hitler at Munich) — that there is always a Hitler-like aggressor being appeased and about to drag the world into conflict. There is sometimes merit in that charge.

As, likewise, is there sometimes merit in the charge against isolationists and other doves that they always see 1914 (start of WWI) or 1964 (beginning of escalation of troops in Vietnam) — the imminent and foolish entry into or escalation of a war that can’t be won — or even if victory were to be gained, it would be Pyrrhic.

Knowledge of history can be as much a snare as a guide — if it is wrapped in a dogma that distorts the current facts to match the preferred historic lesson.

Our actions — if any — in the Iranian nuclear weapons development controversy cry out to be based on a careful assessment of facts — and a heartless rooting out of assumptions, hidden or otherwise, that may be driving policy.

Those who are or will be calling for U.S. military action to damage and delay Iran’s ability to develop operational nuclear weapons — that is those for whom it is now 1938 — make a number of assumptions: 1) The Iranian regime intends to develop nuclear weapons; 2) once it has them, being fanatics, they may actually use them against Israel, as they have repeatedly threatened; 3) even if they doesn’t use them, it will change the dynamics of the Middle East by inducing a nuclear arms race between Sunni Muslim countries and Iran, and by giving Iran a huge capacity to intimidate and dominate the region; 4) both Europe and the United States will eventually fall within the missile shadow of a nuclear Iran — thus giving Iran capacity to be a world player and possible precipitator of nuclear war even beyond the Middle East; 5) the regime is inherently hostile and aggressive, particularly against the U.S. and Israel, and will keep pushing until pushed back; and 6) even tough sanctions will not deter Iran — moreover, Russia is too invested in Iran to truly cooperate with us, and even Europe will not enforce tough sanctions.

The 1938’ers further believe — or claim to believe — that while Iran can create havoc in response to our military action (threaten oil transport out of the Gulf, terrorist attacks in the Middle East, Europe and probably the United States, further harm to our efforts in Iraq and Afghanistan), they would be even more dangerous — and just as ill intentioned — if nuclear armed. And they make the factual assumption that the threat will emerge sooner rather than later. John Bolton warned last week that we have only days.

The Obama administration, on the other hand, holds vastly different assumptions: 1) Iran may actually not want nuclear weapons. 2) If they do want them, Russia will help us stop them. 3) If we settle the Israeli/Palestinian dispute that will reduce any nuclear aspirations Iran may have. 4) If we were to attack Iran, Iran could create more chaos than we can manage. 5) But if Iran did develop their nuclear weapons, we can deter their use by providing a nuclear umbrella for both Arab and Israeli.

And, factually, they assume the danger is off by at least a year — and that Iran is running into technical problems. Of course, predicting when Iran reaches its nuclear threshold is usually driven by policy goals. The CIA in 2007 — which did not want war — actually concluded that Iran had given up its objectives. Now they technically claim we have a year.

Back in 1938, British Prime Minster Neville Chamberlain could have gone down in history as the greatest diplomat of the 20th century — IF he had been right that Herr Hitler had limited ambitions that could be appeased. There is nothing wrong with appeasement if the aggressor can be appeased at acceptable costs. But as we know, Hitler could not be appeased — he had to be defeated.

So the question today is not whether to appease Iran or not — but whether Iran is appeasable. And if not appeasable, whether its threat can be defeated with acceptable costs. Those are factual questions — although all the facts cannot be known before the event.

For me, having observed the Iranian regime, as we all have, I find the Obama administration’s factual assumptions to be mostly wishful thinking, at best. Although, the almost certainty of Iran’s terrorist response to a military attack by the United States is a factor to sober the mind and hesitate the hand. Nonetheless, the grim assessment of the 1938’ers seems sadly more realistic.

AUTHOR
Tony Blankley is a syndicated columnist in the United States.