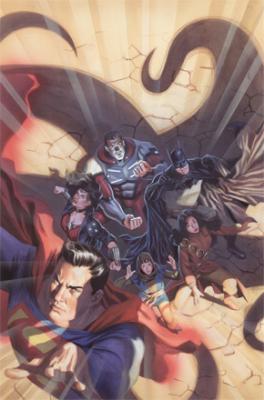 So many years after a super villain raged unchallenged over the Twin Towers, many Americans still unjustly blame innocent Muslims for the horror. Now Superman, Batman, Wonder Woman and other superheroes of the DC Comics Justice League have rallied to save the world from the disastrous fallout of America’s hostility towards Islam. As the task is Herculean, they are getting help from their counterpart superheroes in the Muslim world: a group of 99 fictional characters each named after one of the ninety nine attributes of God in Islam. In an unprecedented artistic collaboration, DC Comics in the US has teamed up with the Middle Eastern publisher of the popular The Ninety-Nine comic books to set the world right again.

The Ninety Nine comic book series is the brainchild of Kuwaiti entrepreneur Naif Al Mutawa. The brilliant clinical psychologist has a way with free associations. He holds up his palms to show you the number ninety-nine. The palm reader’s heart line, head line, and life line form the number 81 in Arabic (or Farsi); add that to 18 which is a mirror image on the other hand and you get 99, the name of his comic book series. When he is being politically mystical he notices that the product of the numbers in 9-11 is 99. His business mind is also quick to see connections. When President Obama was giving his Cairo speech reaching out to the world’s Muslims, Al Mutawa jumped at the chance to leverage Obama’s message with DC Comics and make a deal where the Justice League could team up with The Ninety Nine. As a result these Muslim superheroes could get a foothold in the American market.

Al Mutawa’s artistic mind is just as creative. The origin story of his superhero team is a well-crafted tale weaving together aspects of Islamic history and culture with modern plot elements that a contemporary youth would delight in. A long time ago Mongol invaders raided the vast library in Baghdad and threw all the books in the Tigris River to use as a bridge. There were so many books, so much knowledge, that the Tigris ran black with ink. The guardians of the books threw ninety-nine stones in the river–one for each attribute of God–to soak up all that wisdom. In the 21st century the stones have made their way to all the continents of the world where ninety-nine young men and women from almost every country have come to possess them. At first they are unaware of the powers that each stone bestows. Later when they discover the stones’ powers they use them for personal gain. Mujeeba (the answerer) for example uses her stone’s powers to win quiz shows! But ultimately dramas in the personal lives of the characters lead to self-discoveries that elevates them to self sacrificing hero status.

Al Mutawa is careful not to pitch religion is his artistic creations, just high morals and universally respected values. Except for the fact that they come from Islamic cultures none of his heroes explicitly professes a faith. Of course some of the most popular Western superhero stories–being modern day myths–carry the religious themes and archetypes of their culture. For example, in one movie the disembodied voice of Superman’s father says, “For this reason above all, their [human] capacity for good, I have sent them…my only son.” A clear reference to Jesus. Superman came to Earth adrift in a space basket not unlike how baby Moses was set adrift on the Nile towards his great destiny. Batman had his first epiphany when bats visited him from above, similarly Spiderman’s powers came to him from the above via a spider on the ceiling. The Mighty Thor was a Norse God, Wonder Woman references classical Greek’s Amazons, The Flash is reminiscent of the Roman god Mercury, Aquaman hails from Poseidon’s world. As a perceptive psychologist, religious or cultural archetyping in comic books is not lost on Al Mutawa, but he’s simply adding Islamic myths to the pantheon not competing with it.

Are there specific Islamic flavors that appear in The 99 series? Yes, the obvious one is that each character is named after one of the attributes of God according to Islam. There is Jabbar the powerful, Widad the loving, Noora the light, Hadya the guide, Jaleel the majestic (he’s Iranian), etc. However these attribute names are doled out to the various genders with a contemporary nod to gender parity. Mumita the destroyer, for example, is a female adventurer who used to make a living as a bone breaker thug before she reformed. Only five of the fifty female characters cover their hair. Batina (the hidden) wears a burqua, whereas Noora (the light), Hadya (the guide) , Mumita (the destroyer), Musawwira (organizer) , Widad (love) etc. do not cover their faces or hair. Traditional Islam does imprint traces of the chastity element in that a male and a female superhero are never left alone together. Also–most tragically–in the cooperative effort with DC the famous Wonder Woman low cleavage is noticeably absent.

Vigilance in the sexual behavior of youth seems to be in demand in the Muslim market for now. Future Muslims may or may not choose to relax this concern, but whatever they see fit to do, regarding any behavior, flexibility will be key. Al Mutawa has cleverly encoded this concept in the storyline: the magic stones automatically upgrade to adapt to the environment. In fact the main villain in the series is vile precisely because he wishes to keep the stones just as they are–like some of Al Mutawa’s Muslim detractors who oppose his novel idea as somehow un-Islamic..

The effect of years of inflexible teachings by such villains is apparent behind the scenes on the drawing and inking tables of the 99 comic series. Islam’s traditional aversion to the representational arts has made it such that (the one exception being an Iranian artist on the staff) the top notch drawings in these comic books are created by artists from non Middle Eastern backgrounds. Perhaps as a practicing Muslim Dr. Naif Al Mutawa’s biggest long term contribution to good communication between Muslims and the Western world will be that he made such high quality graphic art accessible to Muslim youth in an entertaining package. In this way, they will grow up as more able practitioners and critics of the arts. Muslims have 99 different words for God, and that’s a lot. But here in the West one picture is worth a thousand words.