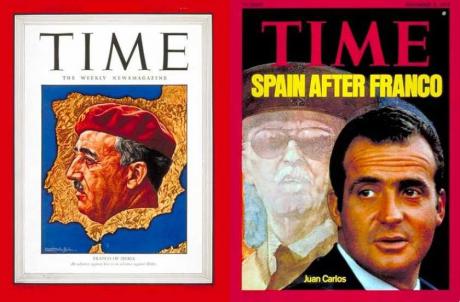 To some, the government’s decision to recognize victims of Franco’s regime is simply righting past wrongs. But many don’t want to revisit this painful period of Spanish history.

“In Spanish history books, there are some blank pages”, states Francisco Espinosa. “Only the side of the dictatorship has been told”. His father was killed by Franco’s men during the civil war. Now he hopes to identify his father’s body and give him a proper burial. Since Franco died more than 30 years ago, there has been a nationwide pact of silence about the atrocities committed during the civil war. Now the government wants to reopen the archives and offer compensation to the Nationalists’ victims. But these plans are reopening old wounds for the Rupublicans’ victims.


Witness – Digging up the Past (Aljazeera English):
One man sets out to exhume the ghosts of Spain’s totalitarianism past.
Part I:
Part II:
Coronation Ceremony of King Juan Carlos (1975):

King’s Oath in Front Of Parliament:

Military Takeover of the Parliament by Franchist General Tejero on 23 February, 1981:

King Juan Carlos speaks on Television against the Coup in Parliament:


King Juan Carlos to Chávez: “Shut up” (ENGLISH SUBTITLES):
King Juan Carlos I of Spain tells Hugo Chávez “Why don’t you shut up” (¿Por qué no te callas?) and leaves the meeting of the 17th Ibero-American Summit during a speech by Nicaragua’s Daniel Ortega, 10 November 2007.

Extended trial and execution list of members of the Islamic Republic. by Simorgh5555