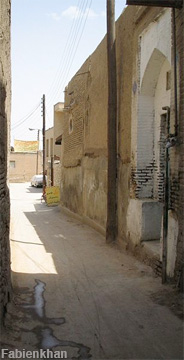 In our neighborhood
There was a tiny mosque
Which had a dome, but no minarets,
And as a child I thought
That Ali had been stabbed there. (1)

The man who called us to prayer
Was a chubby laughing janitor
Who dyed his hair, and beards
Hands and feet with henna,
And the big toe of his right foot
Stuck out from his torn shoe.

Every day early in the morning
I awoke to his harsh bellow
From the rooftop of the mosque
And thought of the shivering boys
Who with sleep around their eyes
And copper bowls in their hands
Passed by the empty mosque
To buy brains and tongues
Ears and cheeks
From the lamb cookery
At the entrance of the alley.

The Revolution gave the mosque two tall minarets
With loudspeakers on their balconies
Blasting days and nights.
The mosque was filled with bearded men carrying rifles
And veiled women standing in line
Collecting their monthly ration cards
From the state head of prayer
Near his pulpit or prayer niche. (2)
But the laughing muezzin had gone
And instead of him,
The son of the local lamb chef
Sat on the balcony of one of the minarets
Keeping an eye on the neighborhood.

From then on, I would cover my ears
At the sound of the call to prayer,
And never pass by the mosque again
Fearful that the bearded young men
Would jump on top of me
And butcher me in the prayer hall,
Then wash their dirty hands
AT the ablution pool
Without asking themselves:
Is it lawful to shed the blood of a “warring infidel”
In the confines of the neighborhood mosque?

1. In 661, Ali, the first Imam of Shi’a muslims was fatally stabbed
in a mosque in Kufa, Iraq.
2. Prayer niche (Mihrab) is a niche in the mecca©facing wall that
marks the direction of prayer in a mosque where the leader of
congregational prayer stations himself.