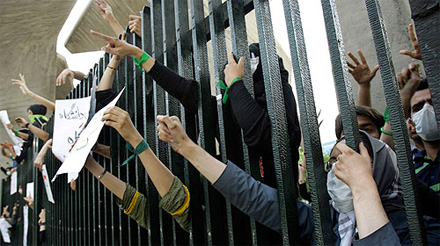 They have strangled the humming bird,
and still in the twilight of the river,
her song flows…. H.E. Sayeh

“We are not afraid of economic sanctions or military intervention. What we are afraid of is Western universities and the training of our youth in the interest of West or East” – Ruhollah Khomeini

On Dec 7, 1953, three students in Tehran University were gunned down while protesting the visit of the then Vice President Nixon to Iran. Since then, 16 Azar (7 December) has been named Student Day in Iran and is commemorated each year, often with violence. Mohammad Ghandchi, Bozorgnia and Alavi were the students who were killed that day. They left their mark on the Iranian Student movement. Since 1963, Iran’s major universities have been bastions of intellectual opposition to both the regime of the Shah and to the Islamic Republic. Among Iran’s well known members of Revolutionary Organizations were some of Iran’s brightest university students. The list is long, including revolutionary leaders such as Masoud Rajavi, Bijan Jazani, Masoud and Majid Ahmad-Zadeh, Vida Hajebi, Amir Parviz Pouyan and Hamid Ashraf. All except Rajavi and Hajebi were executed or otherwise killed by the regime of the Shah.

Outside Iran, the world’s largest student organization in exile, the Confederation of Iranian Students (National Union), came into existence in April 1960, holding its first congress in Heidelberg, W. Germany. Later, the congress convened in Lausanne, Switzerland, called the Unity Congress with eventually formed branches in the U.S., Germany, France and England. The Confederation had chapters in most European capitals but also and major US cities and in Asia. Its tens of thousands of members and supporters were united in their struggle against the Shah’s dictatorship and for (widely divergent forms of) democracy for Iran. It represented many ideologies and ideas from pro-Soviet, pro-China to liberal- democrats, nationalists and Muslims, but all under one umbrella before it split it up into several factions. (See Dr.Afshin Matin’s comprehensive study titled, to the Vali Faqhi, writes of the torture he endured: “The iron fist of interrogators would also result in my passing out. On several occasions the interrogator in charge of my case strangled me to the point of me losing consciousness and falling to the ground. For days following these strangulations, I suffered such severe pain in the neck and throat area, that eating and drinking became unbearable.”

Amir Rashidi, a software engineering student and a member of Advar, who left Iran 8 months ago, was banned from studying. He talks of the events which led to the student arrests: “The ninth Majlis closed down parties and newspapers, and the last place of resistance that remained, universities, came under attack as well. Advar, which emerged from Tahkim, was doing good work. Both Advar and Tahkim had liberal/secular and Islamic tendencies but I would say that Advar is mostly secular. In my opinion, Tahkim faced problems because of internal issues. Advar has chapters in Isfahan, Urumieh, Kermanshah, Amol, Gilan and Ahvaz, a total of 16 cities. We were very much involved in the pre-election process. We formed Shahrvand Azad branch to inform people about the elections and the voting process. We told them, it is not enough to vote but you must stand by your vote and protect it. When they asked me, what should we do if there is fraud I told them that you must fight for your vote. We supported Karroubi in the elections, because we took our declaration and he agreed with every single demand. It is important to note that Karroubi met with us and supported us but Mousavi refused to even meet with us. He considered us personae non gratae. Karroubi even helped me personally when I was in prison. That is why one of our slogans was Hami daneshju, hemayatat mikonim (We support you [ Karroubi] because you supported us [students]. Today, all the members of the steering committee of Advar are in jail, Mr. Mo’meni, Dr. Zeid Abadi, Hassan Asadi Zeid Abadi, and Ali Malihi are in jail. Ninety percent of the time, we had political and educational demands. For example, we protested the idea of bumi-sazi jensiati, (gender domesticity), which in essence means that female students can not leave their towns to study and can only study certain subjects. This turned into a political demand. We also objected to the regime’s idea of bringing martyrs of the Iran-Iraq war and burying them at the university. We believed that a university is not a place for burial even for martyrs. The so-called President of the Republic is lying when he told the foreign media that people can even insult him without fear of persecution. The fact is that one of the charges against the students has been ‘insulting the President.” It is amazing that someone like Bahareh is given such a long sentence. Even by their standards she has done nothing illegal to deserve it. The fact is that even the students’ families are pressured as was the case with a sister of a friend of mine who was banned from studying because of her brother’s activities. Many times, students are kept from either studying or teaching if they don’t pray. My father was reproached for this by the authorities.”

A student from Tehran University whom I interviewed recently said: “Last year was a bad year for the students. According to government statistics, 70 percent of the students voted for rivals of Ahmadi Nejad. They had organized a campaign to assist voter. Two days after the elections the regime attacked the dormitories again and arrested many of the student campaigners. Many were barred from further education. In a desperate measure, the regime proposed to move the larger universities to smaller cities, but that proved impossible. The solidarity among students in the last year was not accidental. It was a reaction to government incompetence. Many students are not necessarily political. Before the elections, the clampdown on students resulted in a vacuum and activism was less visible but since the fraudulent elections which angered many students, activism is now widespread. This is also due to a more closed atmosphere, the lack of future prospects, the lack of social and cultural freedom, of prospects for marriage [this is an important issue among the youth as it is costly to get married. Gender issues are a big deal as free relationship is not permitted]. Most students are looking for change in their lifestyle. Most of the time, the regime intends to show that the students’ protest is politically motivated whereas we know that 60 percent of the student population in Iran are of the post revolution period. Economic issues play a major role. They want jobs, they want to form a family and have a future, they want to have a say in their basic everyday life. The regime is unable and unwilling to meet these basic demands.”

According to Nasser Mohajer, a Paris-based Iranian writer and researcher, “one can hardly compare the ongoing student movement in Iran with the one that existed during the last decade of Mohammad Reza Shah Pahlavi’s reign. True, they both were anti-dictatorial, yet they opposed different things. Obviously the ´positions´ they were opposing were quite different. The student movement at that time was strongly anti-imperialist, Marxist oriented, Third Worldist, and somewhat populist. Today’s student movement is ‘western oriented’, pro- democracy, strongly oriented towards individual freedoms and somewhat nationalistic. In retrospect, the student movement then was revolutionary and idealistic. Today we see a movement which leans towards rational action and real politics. Obviously, the international context in which they operate is quite different. One has to see the differences against this backdrop too.

Dr. Mehrdad Mashayekhi, professor of sociology at Georgetown University says the following: “Iranian students during our time were secular in nature, the idea of not being secular was not a question, but today secularism has been theorized and is part of the dialogue. In both eras we find the ideas of anti-tyranny but today we are also confronted with the rights of women, minorities and demand for basic civil rights among the majority of students.”

Students who accept the status quo and who go on with the set curriculum will not necessarily face obstacles but as soon as they raise their voice in any sort of opposition or make demands, they are the first to be targeted. They are barred from studying, thrown in jail, given hefty bails, face torture, mistreatment, long prison terms and the threat of execution.

Life for students in Iran has not been easy, especially those who seek justice or demand more freedom. Yet some of Iran’s best and brightest come out of Iranian universities and are sought after by American universities. Many have had to leave their homeland to seek more freedom, opportunities or take refuge in exile from harassment and imprisonment.

Iran’s brave students continue to resist despite being targeted by IRI officials. They are once again holding the banner of the struggle for democracy, freedom, civil rights and the rule of law whether in prison or outside. May we see them back where they belong, the arena of higher learning, free from strangulation, both physically and figuratively. May we see them build a new Iran.

Part of Momeni’s letter to Khamenei

“Today I am in Evin prison, because I have been identified as someone who is critical of the Islamic Republic of Iran. As such, it is not irrelevant for me to recount my political views and activities over the last decade. I entered university in 1996 and in the same year joined the Islamic Student Organization and then was elected to Office to Foster Unity (Daftar-e Tahkim-e Vahdat) and was a member of the Central Council and served as the Secretary of Tahkim until 2005 when I completed my Masters studies in Sociology at Allameh Tabatabaie University. From 2005 to the present I have served as a member of the Central Council of the Alumni Organization of University Students of the Islamic Republic (Sazeman-e Danesh Amookhtegan-e Iran-e Islami—Advar-e Tahkim-e Vahdat). I was the spokesperson for this legal organization, which works toward the advancement of democracy and human rights. During my time as a university student, my colleagues and I were most concerned with the independence of the institution of higher education from the centers of power and political parties and groups, as well as providing criticism of the state in an effort to support the people. My friends and I at the Office to Foster Unity believed that the mandate of the student movement was to facilitate the development of an environment where the historic demands for freedom of the people could be articulated and civil rights defended, despite one’s political and ideological beliefs and leanings. As such, we believed and continue to believe that the student movement should not sing the praises of the power structures and those in power, rather it must offer criticism of those who take advantage of their power, no matter what their background, and must defend the rights of the people, including women’s rights and the rights of ethnic and religious minorities. For this reason over the past decade, I have been targeted by those in power and security forces and as a result have experienced prison and solitary confinement on several occasions. Taking into account this arrest, I have spent nearly 200 days in solitary confinement.”