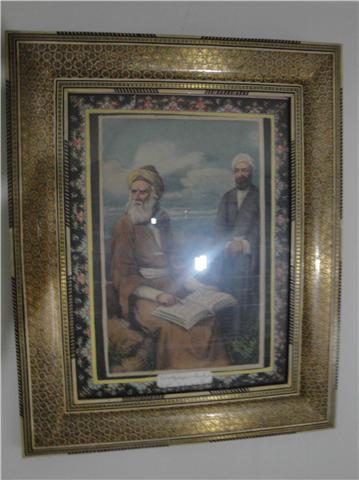 Love without thinking or blind love which can destroy a nation or a country which is a device in the hands of the Imperialists or communists or other lists.

Sorrowfully we the people in the 21 century are still blind and just go after something which is not true. And we do not measure a person by humanity measurements but with our cultural or blind measurements.  If somebody is different and does not fit our measurements, he/she fails. We think that our measurement is absolute right and the best in the world.  The new colonialism is using this device to separate the people and destroy them. Because they want to be master and have billions of dollars easy money through these actions. The measurement of old tradition or  religion like do not lie, do not still , do not say bad words or be nice and friendly, do not have an eye to your neighbor husband or wife and do not perform adultery is losing their value. Now the value is be rich and have powerful friends and do wrong things.

I remember that a mother told his young son, if the most beautiful female or  a nice girl with the best cloths like a bride  is passing aside you, do not think about her concerning sex, but think she is your sister and love her as a sister.  And if the people gave you the most precious jewels to keep them for a while, do not take them or some of them for yourself. That the stilling.   And if you are hungry and your are forced to take something from other people , just take so much that you really in need and if you do not take you will die. And give it back as soon as possible and you are able to return. Do not take bribes and illegal money because the people who give bribe are not happy for that condition and they are forced to give bribe.   Do not show that you are very religious if you are not and do not use it to cheat the people. But now instead of these measurements, we have other measurements. You can lie, if you think your religion is with that lie will progress.  You can lie if it is for God or religion or for your own benefit. You can cheat people if you have to.  So you can show that you are religious and so you can rob people.

The love and unity which the philosophers or prophets wanted had changed completely. Now religions are in the service of business, money or politics.  And the main point is scarified for the little instruction.

Sorrowfully these proceeds are gone into the marrow of the bones of the people and sit inside them completely. So in this way the masters can control much more easily the third world countries. A young man who has not any information about his religion and has just a name of that religion and is on the paper belong to that religion without any deep knowledge of that religion is willing to kill other people who have other religion or they are on the papers are with a different religion. But he forced to think that his religion and in our case just the name of that religion is much better as all other religions of the world and they are wrong and should be destroyed. He has no deep knowledge of his own religion and now he wants to judge other religion.  He wants to kill other people if they have other religion, so he can go to the paradise and have the hurries who are after any intercourse a virgin again.  So he is willing to run on the mains of bombs and so his whole body will explode to a lot of small peaces and in this way he will go to paradise to use his manhood against the hurries who are waiting for him to be loved by him.   Each part of his flash or meat is spread in the place and he cannot even bury as he has gone to many parts for being with the hurries in paradise.  Which power can train such young people like that? The power of believe in…?

Just think that two radical people from two different religions kill each other and each of them think he will be in paradise with the above mentioned hurries.  So if they see each other in paradise, so they will again continue their quarrel or not. They will continue their fighting or not?   For example two very radical or very religious persons have fight with each other and one of them is killed by the other one, or both are killed. Which one will go to paradise? Where is the true? A woman told her very close friend who was a Bahai and wanted to teach her about their faith or explain the faith to her. And she tried with logic and books to influence her or convince her that the Bab is a true imam or prophet.  She put all her time, effort and knowledge in this way to rescue her friend and she loved her so much and wanted to share her faith with her, because she thought that is the pure truth. Next day the Moslem friend of her said to her.  Look dear Nushin, I know that you love me and you are a very good friend of mine and you want to rescue me. I love you very much, too and want to be your friend for ever. But about your religion and Bab or Bahaullah even if Mohammed self comes down with his glory and his angels and say that Bab or Baha were truth prophets, I do not believe it. I will never change my name from Moslem to Babi or Bahai. Ok my friend. So you can see how deep she was involved with her Islamic religion and even Muhammad self had no chance to change her. Just like the Moslem who cut the head of the ground son of Mohammad and they claimed they believe in the prophet Muhammad, but they kill his own family?

The Moslem boy is running to the mains and bombs to go to paradise. And in Shiraz ten young girls who were like brides of Shiraz will kiss the robe of execution and let themselves to be killed for the Bahai faith.  They believe so deep in the religion of their parent that they are willing to be killed for that. What are you saying? Why normal people do not have this type of believe?  That is a philosophy believe and nobody can even prove this believe by scientific way, only by words and believe or love.  It cannot be proved as a pure truth with our today knowledge.  And many people from each religion are willing to be killed, because they have a deep believe in that religion.  These people think that they have the truth and the other people do not have it. Sorrowfully these people did not learn to respect other believe and have tolerance with other thinking, each person will say that I am right and the others are wrong.  You can imagine if these people meet the system how bad they can be misused by the cruel system of the world. They will be good and cheap devices for the system of the world who want hate and disunity between people.  They misuse the religion as a device to destroy the people life and love and they want to bring more hate and disunity between people by using all little differences which the people may have.