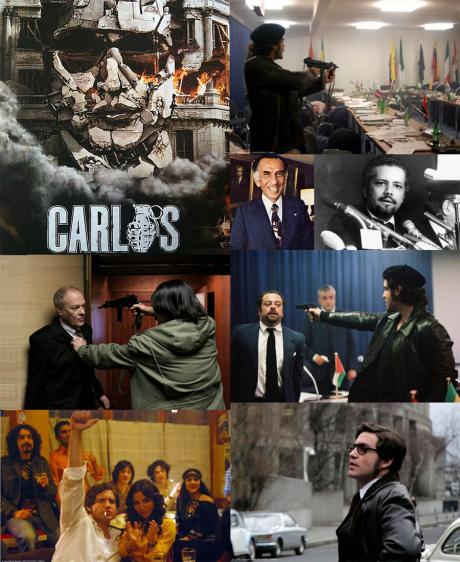 A Film about Venezuelan revolutionary, Ilich Ramirez Sanchez, who founded a worldwide terrorist organization and raided the OPEC headquarters in 1975 taking Iranian Jamshid Amouzegar and Saudi Sheikh Ahmad Zaki Yamani Hostage is the subject of this Bio Epic directed by Oliver Assayas and Starring a namesake Edgar Ramirez in the Title Role of Carlos with Badih Abou Chakra in that of Saudi Sheik Yamani and Nourredine Moszadah in that of Iranian Diplomat Jamshid Amouzegar.

Carlos is a 3-part French television drama mini-series, first broadcast on Canal+ in 2010. Produced by Studio Canal and Film En Stock’s Daniel Leconte and Jens Meuer in association with the Sundance Channel, it was created and written by Dan Franck and Olivier Assayas, also directed by Assayas. It stars Édgar Ramírez as Carlos the Jackal, a convicted Venezuelan terrorist and murderer. After several bungled bombings, he achieved notoriety for a 1975 raid on the OPEC headquarters in Vienna, resulting in the deaths of three people. For many years he was among the most wanted international fugitives.

The 5½ hour version of Carlos was screened out of Competition at the 2010 Cannes Film Festival on May 19, 2010. The series aired on Canal Plus in prime-time in late May 2010. IFC Films acquired all U.S. rights to both the mini-series and the theatrical version. The former will premiere on the Sundance Channel in October 2010, while both versions will get a theatrical release with only the shorter version available on video on demand. More Here

In Search Of… Carlos (The Jackal), The Most Wanted Man in the World

Documentary Series Hosted by Leonard Nimoy and broadcast weekly from 1976 to 1982, Season 4 Episode 2 Carlos ( The Jackal)

Images of Carlos through the Years and today in Particular:

RAIDERS OF THE BLACK GOLD: Hollywood and Oil by Darius KADIVAR

THE RED AND THE BLACK: Shah of Iran denounces the Unholy Alliance (1977/78)