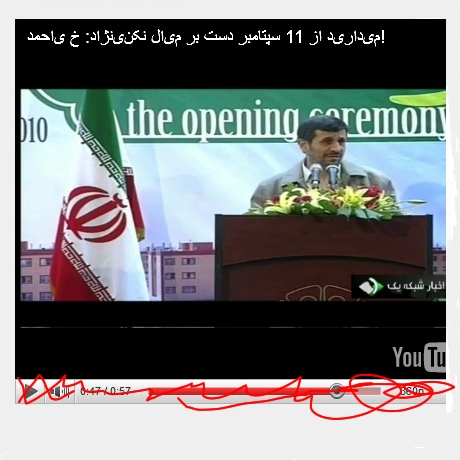 Once again it is confusing (to the people who don’t speak any Farsi) what Ahmadinejad said in his latest remarks in the opening of a housing project a couple of days ago.

Here are some possible translations in English (I am sure there are many other interpretations):

Your undertaker and your discussion table should be taken away because they have dragged the universe into mud.


May the undertaker take you and your negotiation table, since you have dragged the world in mud.

Death be upon you and your consultation desk because you have soiled the universe.

The diener must take you and your conference table because you have mired the macrocosm.

Take yourself and your interview desk to a deathwash since you have drawn the universe into sludge.

You and your conference table must be wiped off the muddy world since you have done so.

[The leaders of the United States of America] must be buried by the undertaker, along with their negotiation table, since they have destroyed the world.

The United State and [all] consultation desks [within it] must be taken by the diener, since [the USA] has muddied the entire planet.

[The world must be managed with love and care, and the American leadership] and their negotiation tables must be taken away by the undertaker [for burial] since [the way the world’s economy was managed by the corrupted capitalist system in the last 100 years was unfair].