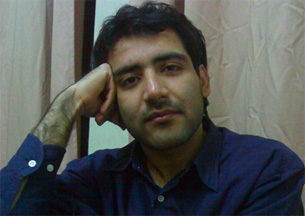 Student activist Majid Tavakoli has been detained since December 2009 and sentenced to 8 1/2 years in prison. He wrote this letter to students on September 15. Translated by Ramin Parham.

More than a hundred years of struggle against despotic regimes has finally taught us, in the drought of knowledge and humanity of the Islamic Republic, resistance and the ability to remain vibrant, alive and creative, in order to put an end to this long, sad story of sterility. The hundred year-long story has taught us that liberty has a price to be paid, risks to be taken. In the continuation of this long road, we are happy to have the student community that we have, ready to embrace danger in order to fulfill its aspirations for liberty. University, to tell the truth, is surely the home of enlightenment and the critical mind. Democracy and human rights have, these days, become our guiding lights, helping us strengthen our efforts for liberty, peace and security worldwide. Our entire hope rests on the shoulders of this new generation, which has always been effective and whose innumerable members herald our final victory.

Our people have made a pact with our students and the university. They have signed a pact for freedom of expression to survive, for joy and happiness to enter each household, for violence to be denounced so decisively that it will never again find any opportunity for expression, for the chains binding opinion and thought to be broken forever… for liberty and democracy and human rights and prosperity to be implemented. Our people have a hard pact and you, the students, have a hard task in front of you. But I know that your determination will prevail and dictatorship, even if it once again channels all its power into violence, will be defeated.

For the generation of 2010, as for my generation, our campuses will be the arena to come together… They [the Iranian regime] want a university that is submitted to their will… In the name of Islam, they have downgraded sciences to mediocrity and substituted submission and resignation to knowledge… But you must remain aware… For you have accepted the title “student” to bear the responsibility, in the harshest of times, to uphold the moral high ground associated with it. You are the inheritors of a high tradition which, despite years and years of repression, has remained alive and vibrant. You are the model for change, bestowed with a critical mind, endowed with the courage to defend criticism, to accept criticism, and to preserve your stronghold of enlightenment.

Seeking knowledge and devoting oneself to informing others and raising their consciousness have seized the people’s attention. May your togetherness today be another one of your privileges, of which you will make good use. Although repression in these years may have, from time to time, affected our resolve to advance, yet our faith in remaining together, as the student community, has helped us eradicate our fears and take great steps forward within the student movement. It has been our role to achieve these steps in the best possible way. Our greatness does not lie in being great and taking upon our shoulders great tasks. Our greatness has been to achieve great goals but by taking small steps at a time… The experiences of past generations have continuously emboldened our truth and added splendor to our identity….

You shall know that you will determine your own future and that your values and behavior will determine those of society as a whole. You live in the heart of unfolding events, in the face of uprisings and if you are not afraid, victory will surely be yours. Your resistance will erode despotism… Do not abandon your Green leaders. Do not forget your political prisoners and their families… If you all remain together, victory will be yours….

Beware of making a wrong move in our impatience for liberty….Beware of satisfying ourselves with tiny advances in a system based on confusion, disorganization and abnormality, for we shall encounter difficulties tomorrow….Beware of exaggerating in creating heroes… Beware of adding to violence while trying to denounce violence….Let us consolidate first the aspirations of yesterday before we formulate new ones, for merely formulating new ones will not propel us forward. There is no need to formulate a new demand each day….

After all that violence, all that betrayal, all that mediocrity; after all those forced confessions and all those show trials, false interviews, tortures, solitary confinements, rapes, summary justice and executions; after all the slandering and cynicism, hope is still alive and our people are still hopeful and eagerly awaiting the day when their enemies, who are the enemies of democracy and freedom and human rights, are denounced and unveiled and their faces are known to all. Meanwhile, the enemies of the people are nervous –afraid of witnessing the failure of their repressive policies. It might be that the regime is considering re-establishing Terror. It might be that our people may have to face, once again, Terror. In that case, the regime will have to speed up its troop movements. It will have to move around its remaining troops, each day, from one corner of the country to another. It will have to show off its muscles, its bombs and its missiles to the world. In that case, the regime will have to add present criminality to its criminal past… Through terror and warmongering, the regime attempts to terrorize the people at home and deter the international community at large….

Bells are ringing and once again the time has come to go back to class. Some chairs in the classrooms are empty this year, while prisons are full. So, let us not forget our imprisoned comrades… We used to say that universities are like barrels of explosives which injustice will ignite. So, let us not forget our impoverished ethnic brothers, our oppressed minorities, our jailed journalists, our exiled thinkers and learned scholars, our repressed intellectuals, our disadvantaged sisters, our enslaved workers, our impoverished teachers and teamsters. Let us not forget them… For years, these few who rule our land with despotism have provoked crisis after crisis so as to have the needed pretext to shut down universities… But your awareness will prevent them from staging, once again, their criminal and shameful scheme embodied by the Cultural Revolution. Having continuously failed in achieving their ultimate goal, they have done their best to subjugate universities into mediocrity. While shutting down any independent-minded student organization or publication, one after another, they have consistently built up their own parallel GONGOs [government-operated NGOs]….

Despotism’s palace is shaking on its foundations. Fascism is wearing away, and religious dictatorship is nearing its end. The rise of this millennium is the downfall of despotism. Fallen dictators now lie in the mud of shame. The process of eroding repression has started. Worn out under the heavy weight of their own weapons, corroded by their own lies, exhausted by their own violence, denounced in the face of the free world, their back will surely break under the steady steps of freedom-lovers. Today, dictators are alone. Today, dictators know that they must go.

Let us take our last steps with a more determined pace. Your voice can be heard even from behind the prison walls. The determination of your steps will give meaning to history itself. With your will, your destiny will be determined, history will be written, the future will be yours, and you will embrace eternity. Without the consent of the people, without the people on your side, your epilogue will be the same as the despots, reduced to resorting to mercenaries, lies, weapons of mass destruction and missiles in order to maintain their power. Without sincerity, you will be left alone, for deceit and falsehood bring nothing but helplessness. Without courage, you will be subjugated… A society without courage and sincerity is a decadent society headed for destruction.

It is back to school now, and the year ahead of us promises to be a hard one. With unity and by remaining on the side of the people, you will make a pact that will consolidate solidarity, give meaning to resistance for liberty, and make a bright tomorrow ours. I know that the people’s hope will be fulfilled. I know that we will be together to joyfully celebrate liberty….