Cyrus Cylinder Not a Charter of Human Rights 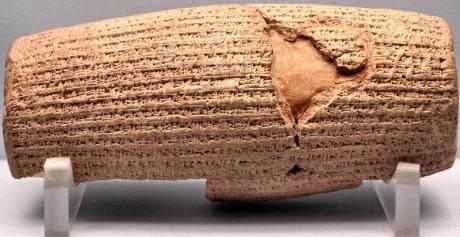 The recent lending of the Cyrus cylinder to Iran by the British Museum reignited the debate about the interpretation of its contents. My research based on several online sources has revealed that many accounts of the contents and significance of the the cylinder are incorrect and are attributable to propaganda initiated by Mohammad Reza Pahlavi and, more recently, by certain Zoarastrian groups. Scholarly accounts view the cylinder variously as a charter of reforms, “declaration of good kingship,” or a “building tablet” that commemorates the restoration of Babylon following Cyrus’s conquest. The official translations, in English and Persian, by the British Museum contain allusions to people’s religious beliefs and to returning the said people to their settlements. These are significant statements coming from a conqueror, but do not constitute “a charter of human rights,” as is claimed by some interpretations. Note that Cyrus makes multiple references to Marduk, the god of Babylon (not to Ahuramazda, as claimed elsewhere). Read the translations and judge for yourself.