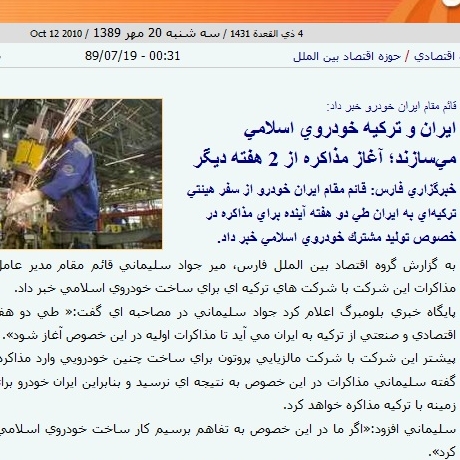 As you might remember, in the past few years the Islamic Republic of Iran (IRI) has made several advances in Islamization of the Iranian society, such as introducing “women-only Taxis”, “segregated parks”, “banks for ladies only”, divided classrooms and concert halls, and so on. The latest development in segregating the two main genders in Iran is introduction of the “Islamic Car”, made specifically for Islamic counties when the first stage of production goes underway, and then for the rest of the world when Ahmadinejad, with help and management from Imam Zaman, takes over the planet!

Iran Khodro, Iran’s largest carmaker’s Deputy Chief Executive Officer, Mir Javad Soleimani, announced yesterday: “If we [Turkey and Iran] reach an understanding, we will begin producing an Islamic car… [The new automobile] will be a brand specifically for Muslim states… We will target their markets.”

According to an insider, the most prominent feature of the new Islamic car is its manually-operated Islamic Retractable Curtain (IRC) that with the push of an Islamic button, lowers a curtain from the ceiling of the car, separating the car into two separate compartments, one for man-only drivers and passengers, and the other side for naamahram female passengers. Another interesting feature of the car will be the use an already-developed Islamic Global Positioning System (IGPS), better known on the streets of Tehran as FAATI (Full Apartheid According To Islam). With this Islamic device, one can quickly find the nearest mosque in any town, the shortest and fastest route to Jamkaran, Qom, and Mashhad, the best location in town to eat free sandees, nazree, sholeh zard, and aab’e salsabil, and routes to avoid traffic congestion due to street demonstrations if you’re in a hurry to go home and watch Islamic programs on the privately owned seda va sima.

Another feature of the car is its Islamic Sound System (ISS). With this state-of-the-art system, any naamahram’s voice, speaking in the car, will be altered in such a way that it no longer appears to be that of a woman’s, and so therefore it will have no shahvati effect on any basiji or labaas shakhsee owners of such cars. But in case IRC and ISS fail to perform their Islamic duty, as it was intended, appropriate redundancies have been built into the Islamic Car so no violation of any Islamic jurisprudence would occur. According to the insider, if IRC and ISS fail altogether then FAATI will take over and direct horny regime-supporting Islamic Car drivers to the nearest sigheh khonee office, or to the nearest khaneh’e efaaf.

Islamic Car’s other standard features include, khaak-e tayamom (bag of baptized soil) for prayer ablution in traffic jams, mohr (clay prayer tablet), dampaei (slippers), pajamas, abridged mafatih-ol-janan (book of supplications), ja namaaz (prayer rug), and a unique plumbing system for filling up aftaabeh (a water vessel for self cleaning when there is no kolookh to be found anywhere).

And for the Islamist thugs who are not interested in IRC, IGPS, ISS, or any other fancy stuff, and all want is merely a basic utilitarian Islamic vehicle so they can go out there and do their usual harassing deeds; the manufacturer is planning to sell a Special Edition of the Islamic Car that has nothing except a large trunk, a couple of chomaghs, a container full of gasoline, and some matches, so regime supporters can go out there and grab anyone they don’t like and take them for a ride, take them to a desolate place, beat the crap out of them, rape, and murder them, and then burn them to death if they are not already dead. This model is also most usable for impromptu (khodjoosh) demonstrations, since it has lots of room for ghameh, pro-regime banners, tear gas, pepper spray, and tazers.