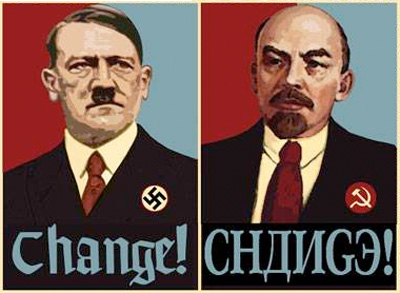 This is a response to an article by Azar Majidi about Shirin Ebadi and Akbar Ganji walking out on the Mohammad cartoonist’s free speech award ceremony.

Are these words a joke or I am dreaming … since when are communists turning into supporters of unconditional freedom of speech and democracy? Is not this notion a betrayal to and or dismay to the principals of CPs – of lost cause of 19th century mentality of dictatorship of one form or another, of the “proletariat”? What have communists brought to humanity in practice? Considering the many atrocities by communists, from Stalin to Khmer Rouge, and half a century of Castro and North Korea,… what record can they brag ever?  In our country, little dictators like Bijan Jazani, the Tudeh Party, Islamic Marxists… all are nourished from communist ideas.

I thought the battle was lost once and for all after the fall of the Berlin Wall not knowing there are still folks out there who look with nostalgia toward this very bankrupt ideology.

While rare, human nature has that capacity too to overlook historical pain with a very creative absentmindedness – and that is one rare case whereby animals are superior for being innocent for lack of intellect.

Being a communist in 1979 Iran, as immature as it was back then, was at least under pressure and persuasive influence of the Soviet socialist block. But being communist in 2010 in the comfort of English democracy, if not naïve, is certainly a poor justification for intellectual inferiority and nihilism. This is one more disgrace to the Islamic Republic, due to lack of freedom at home in Iran, for being the cause of this poverty of thought among the last remnants of the politics of the last century in our country.

Living in democracies, communists can always be used as an instrument to balance the emergence of fascism. That is the only tactical use I can imagine of each, i.e., in business to checkmate the other at street showcases guarded by none but a cheerful democracy. To extend its hegemony and superiority, only democracies can contain its rivals via politics of balancing them under banner of freedom and rights – at zero cost to it.

If anyone should be credited for honoring freedom of speech here, it should be Iranina.com and not an absentminded communist who sounds increasingly like a hypocrite in defending freedom. A democratic Iran will reserve the right for all to express themselves, even communists. The pinnacle of achievement by communists in human history is only comparable to that of fascists. They have never been a viable threat to democracy due to their very oppressive record.

Mr. Ganiji and Ms. Ebadi both have much in their credit in real the struggle inside Iran against Islamist radicals. The hunger strike pictures of Ganji in Velayt-e-Jahl cells in this very website will not be forgotten by us. We can not discount the man for his religious beliefs just because the very religion is hijacked by oppressive opportunists.

There are over a billion Muslims in the world and leveling the fight against the faith is totally a distraction. The war is between those who stand for human rights and freedom of expression and rule of law and those who do not. And I am very skeptical of any hardcore ideologues, be it Islamists or communists, can play a useful role while dragging a repressive past.

Incidentally, the radicalism of Azar Majidi represented in her article is not far from those of Hezboallah and Hamas – only in different terms but surly with same wholeness in soul and language. In fact, this author believes that post-revolution Iran was a victim of very distasteful and unfortunate competition between Marxists who criticized Islamists for not being anti-west enough. They were foolish enough not to know that the death of liberalism was set the stage for uncompromising elimination of leftists first and foremost.