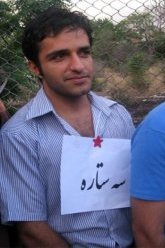 October 20th, 2010 – According to reports from The Committee of Human Rights Reporters (CHRR), Seyed Ali Akbar Nabavi, the father of imprisoned student Zia Nabavi, was summoned by the Ministry of Intelligence and interrogated for seven hours. Informed sources report that Ali Akbar Nabavi was summoned to the Ministry of Intelligence after visiting his son in Ahvaz prison. He was put under pressure and interrogated as a result of “giving an interview and following up on his son’s unacceptable condition.”

Ali Akbar Nabavi had previously expressed grave concern about the lack of drinking water and dire sanitary conditions at Ahvaz prison and stated, “My son is being held in the worst place. The area where he sleeps is infested with cockroaches and mice.”

After his son was exiled to Ahvaz prison, Ali Akbar Nabavi wrote a letter to the head of Iran’s Supreme Court describing his family’s difficult economic circumstances and the dire condition of his son in prison.

Zia Nabavi, the spokesperson for the Council to the Right to Education and *starred [banned] student at Nooshiravani Technical University of Babol, was arrested and incarcerated on June 15th, 2009. Nabavi was originally sentenced to 15 years in prison and 74 lashes by branch 26 of the Revolutionary Court. His sentence was later reduced to 10 years by the Appeals Court and he was exiled from Evin prison to Karoun prison in Ahvaz in order to complete his sentence. Majid Dori, another student activist deprived of his right to education was also recently exiled from Evin to Behbahan prison.

*Editor’s Note: The system of issuing stars against students was developed by Iran’s Ministry of Advanced Education so students with disciplinary issues would get penalized. After a student collects a certain number of stars, he or she is banned from education. The system is primarily used against student activists. Regime officials, including Mahmoud Ahmadinejad, deny the existence of starred students.