Toward a Culture of Civil Liberties, Human Rights and Democracy in Iran 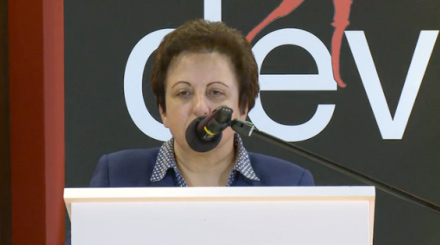 I am at a conference in Maryland, entitled “Toward a Culture of Civil Liberties, Human Rights and Democracy in Iran,” sponsored by Roshan Center for Persian Studies at the University of Maryland. Iranian experts, analysts, artists, activists, and luminaries have gathered from all over the world to talk about, what else, Iran!

The discussions are rich and significant not only in a political context, but also in a cultural and social context. For example, a question was discussed extensively in the area of not just Islam, but all religions vis a vis human rights. Is it possible to be religious and believe in human rights, too? Is it possible for a government to be religious and practice human rights, too? What are our tools going into the human rights debate? Is Persian literature and poetry a good tool for showing Iranians the way? The answers have been interesting coming from Iran experts who have studied Sa’adi’s poetry for example. One viable answer is to be selective in taking what works for today’s experience and thought, leaving behind what is passé and not so helpful.

An interesting suggestion which emerged in an earlier session today, is what would it take for the different Iranian experts, thinkers, and activists who are currently outside Iran to come together and to exchange thoughts and ideas about Iran’s future, leaving their at times bitter differences behind? Something to think about. As Iranians in diaspora, we have been joined by philosophers, former government officials, journalists who have fled persecution, civil society activists, and even clerics. These individuals hold a wealth of information about today’s Iran and its nation, information without which no concrete ideas for a way forward can be achieved. Could we all just get along now?

Professor Ahmad Karimi Hakkak is in charge of organizing this conference and judging by all those who have participated and the huge turnout, the event has so far been a great success. Tonight we will listen to Nobel Laureate Shirin Ebadi’s keynote address, “The Necessity and Meaning of Solidarity.” I will write again and share my photographs, too.