In Response to the blog Jealousy over “Arab” Islam 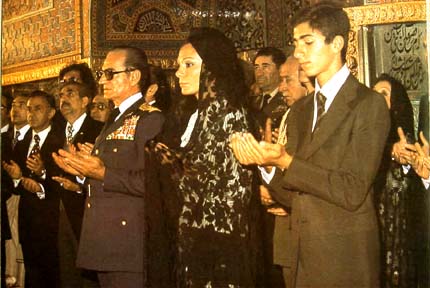 In Response to the following blog “Jealousy over “Arab” Islam”.

This Photo Is Absolutely Coherent :

Which only proves your General Ignorance about the entire concept of the Monarchy.

And so as Such Yes You heard and understood me well they are considered as Chosen by GOD. As was seen as being the case for our very own Ancient Persian Monarchs but under the Shadows of Ahura Mazda.

That after the Arab Conquest they prayed to God under a different Name … Doesn’t Change the fact that it was the Same GOD for Ancient Iranians were EQUALLY MONOTHEISTIC:

Whether or not they are in fact Anointed or not ( and the answer being Probably They Aren’t) is irrelevant including to their subjects.

The Monarchy never claimed nor aimed to be democratic unlike a Republic so arrogantly does but rarely achieves.

Indeed for historical reasons the Monarchy is ONLY Benevolently Democratic :

But in Practice is FULLY Democratic because of the Parliamentary implementation within the Royal Framework which ultimately limits the Royal Prerogatives to a symbolic and representative role. But on paper the Monarch is seen (including by the Monarch himself or herself ) as Anointed by GOD. As such the Queen of England is nothing else but a Veleyateh Fagih, since she is the head of the English Church which happens to have parted from the Vatican at the time of King Henry VIII.

The British actually did with Christianity what we Iranians did with the Shi’it Vs Sunni Dichotomy some centuries ago. In Short we created our own Religion just like the British did with the inception of the Anglican Church.

But in practice and Officially speaking the Queen of England claims to be Anointed by God. Just listen to the following interview of Journalist Jeremy Paxman ( in the 2nd Part where he explains how Queen Elizabeth believes or makes believe that she intimately entered in a direct dialogue with God at the moment of her Anointment) :

What does it mean to be royal? Charlie Rose interviews Jeremy Paxman on the British Monarchy

And the British given that it is a Democracy they are the First to Make Fun of this “Un democratic” and “Religiously Superstitious” interpretation:

That may sound absurd to your Republican Ears Yet No One Questions it in Great Britain or in any other Constitutional Monarchy where the King, Queen and Royal Institutions remain Politically Immune to Criticism But Not to Political Accountability. Since if the interests of the Royal Family for instance financially or legally were to enter in conflict with the interests of the government or the nation at large, the Monarch is reminded of the limits of it’s powers and prerogatives. This is why it is in the interest of the Political establishment as well as the Royal Family to see a BUFFER ZONE aka the Constitution keeps them as Separate from potential Controversy and scandals. But if let’s say a member of the Royal Family has financial problems or legal problems they are EQUALLY Accountable to the Judiciary System as any of the Monarch’s Subjects. Only the Monarch for Obvious Reasons is Politically Immune to such investigations. Although in recent years one of the last prerogatives of the Queen was abolished like requiring her to pay taxes ( also true in a country like Morocco today) and other Monarchies like in Holland for instance where the Private Fortune and Public Spendings of the Royal Family are Transparent to public knowledge. But in general the Royal Family have Privileges denied to other citizens such as diplomatic immunity. Will this like other aspects related to the evolution of society be subject to change in the Future ? Quite Possibly but Not the Royal Institution’s Legitimacy from a Constitutional point of view.

How does that Interfere in the Secular Nature of Britain’s Parliamentary Democracy ? …

Why ? because of the Bill of Rights and other Democratic demands which were implemented Prior to both the American Revolution ( a Colonial war actually) and the Secular French Revolution:

RESTORATION: Britain’s ‘Glorious Revolution’ of 1688 and the ‘Bill of Rights’

However in the Ceremonial or Public duties of the Monarch Respecting the State Religion of the country remains a Duty of the Monarch be it for purely symbolic reasons.

This is true for ALL other Monarchies to date, except for maybe Spain today given it’s own Catholic Tradition. Since unlike Protestant or Anglican countries, Catholic King’s remain Symbolically Loyal to the Vatican and therefore the King of Spain is In No way the Head of the Catholic Church but merely Head of State. That is one of the reasons that when the King or Queen or anyother member of the Royal Family wish to marry or divorce they need to have the approval of the Vatican. This explains why in Monaco ( hardly a monarchy but a principality) for instance Princess Caroline’s divorce and remarriage was not recognized for years by the Vatican and it was only after several requests and the advent of a new Pope John Paul II, that the latter accepted to give his pardon.

Now in practice this does not change anything in the way the elected government runs the country but it does have an influence on the Symbolic representations of the Monarchy because of the fact that the person who embodies the Royal Institution is regarded as Politically immune to any form of criticism because he embodies the country in the same way a Flag embodies the nation. One can find this absurd from a Republican outlook of political life but then go tell the millions of British, Swedes, Spanish, Belgians, the Benelux, Dutch or Danes to name a few that they are a bunch of morons and wait to hear their reaction.

I would go further in my development. The Current Regime in Iran is NOT a Republic per se … It is actually a New Dynasty and from that point of view However Tyrannical and illegitimate from a Constitutionalist point of view it follows a very Royalist approach in that the VF aka Zahak Ali is it’s hereditary Monarch except that unlike the Monarchy it is not Oligarchy Oriented ( Not for the time being at least unless as some rumors have it Prince Mojtabah was to follow in his father’s steps).

The difference however with the Monarchy is that the Islamic Republic and it’s Unelected Turbaned King actually claims the very opposite by claiming to be not only a Republic but also a Democracy.

Unlike Your Turbaned Monarchs the Last Shah no more than his predecessors in the past 14 00 years since the conversion of Iran to Islam ever claimed to be anything but Anointed by Allah except that we would say: Khoda as in the Slogan “Khoda Shah Meehan”

He actually tried to make his Religious Prerogatives Linked to the Pre Islamic Era by giving himself the Title of “Arya Mehr” or by Changing the Islamic Calender to the Royal Calender which at his time was criticized by the clerics and some intellectuals but which was no more no less coherent  with what Henry VIII did when he parted entirely from the Catholic Church.

In the case of An Absolute Monarch as was the case of the Shah it is  all the more coherent to be Accountable to No One but GOD !

That is questionable from a Democratic perspective but Not from a Royal Perspective, even if the Constitutionalist Perspective not only offers a Secular Interpretation to the Monarch’s deemed Prerogatives but imposes a Clear Cut Separation between Church and State.

Under the last Shah’s nevertheless Secular Policies that was Not a prerequisite condition. The Shah was at best Mystic in his private thoughts but Not Religious in his political approach or the way his society and people wished to run their lives. If you wanted to go to the Mosque You could and you were equally free to go to the Beach with your Bikini or Not:

And he did that for Benevolent Reasons. As Absolute King he was not forced to be tolerant. I don’t claim that is correct from a democratic point of view, I am just saying that is how an Absolute Monarchy operates. Had he claimed to be a democrat which he never did, that would be a different matter. It just happens that he was far more moderate than His own father who was far more radical and Secularist than he ever was throughout his reign. Which explains that MRP was No Tyrant unlike Today’s Turbaned Monarch Zahak Ali who calls all those who oppose him including religious minorities : “microbes”.

King Khamenei Would have Been a Perfect Cast to play  King Richard III in Shakespeare’s play:

Al Pacino in Looking for Richard:

Lastly That You may Not Like the Concept of the Monarchy is one thing and should I say your absolute right … But Then Don’t try to define something you clearly don’t understand !