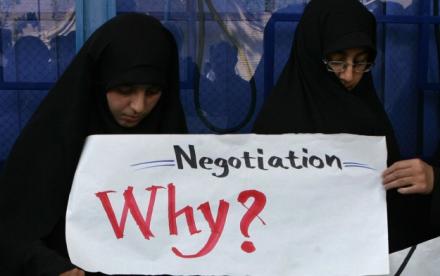 Sometime in the next few weeks, if the parties can agree on a place and date convenient to all sides, Iran and the permanent members of the U.N. Security Council plus Germany, known as the “P5+1,” will meet for the first time since October 2009 to revive diplomacy over Iran’s nuclear program. This is welcome news for U.S. President Barack Obama who, almost two years into his first term, has learned the hard way that diplomacy with Iran is neither quick nor easy.

The posturing has already begun. To create greater political space at home, administration officials have told the media that a new and tougher proposal will be presented to the Iranians. The United States will negotiate from a position of strength, the White House says, as a result of the surprisingly harsh sanctions that have been imposed on Iran, both by the U.N. Security Council and unilaterally by individual countries.

The Iranians are trying to sound equally confident: Sanctions, while biting, have not affected Iran’s nuclear calculus, they say. In fact, Tehran contends that it is now in a stronger position due to its larger stockpile of low-enriched uranium, its progress on 20 percent enriched uranium, and the imminent activation of the Bushehr nuclear plant, which is only weeks from going online.

The reality is that neither side has gained the upper hand since 13 months ago, when the last round of talks commenced. The increased international pressure may have sharpened Iran’s choices, but the Obama administration has no illusions that sanctions alone will cause the Islamic Republic to relent on its nuclear ambitions. Neither Washington nor Tehran has time on its side.

While the Iranian government has regained control after brutally suppressing pro-democracy protests, it faces growing isolation and dire economic realities. And while the failed talks in October 2009 strengthened the White House’s ability to impose tougher sanctions on Iran, the same will not be true going forward. The value of greater international unity around sanctions will be marginal compared with the value of taking first steps toward a diplomatic resolution of the longstanding issues that fuel U.S.-Iran enmity. This time around, diplomacy must succeed for the sake of resolving the conflict, not for the sake of creating an impetus for more sanctions.

So what can be done differently this time around? The Obama administration should carefully study the failed negotiations of October 2009 and adjust its approach to take into account the lessons learned from that round of talks. Although Iran clearly bears a great deal of responsibility for the stalemate of the past 13 months, there is also room for improvement in the U.S. approach. Here is a list of the five lessons that diplomats should keep in mind before stepping into the room with Iranian negotiators.

In October 2009, the United States expressed its willingness to discuss a range of issues with Iran — but only after the Islamic Republic agreed to ship out 1,200 kilograms of low-enriched uranium in return for fuel rods to power Tehran’s research reactor. The Obama administration saw this deal as a confidence-building measure and a necessary step to push back against domestic critics of diplomacy, reduce Iran’s nuclear breakout capability, and create more time for dialogue.

The plan faltered when the Iranians did not — or could not — agree. But the fact that comprehensive diplomacy had been made conditional on the fuel-swap deal meant that much-needed talks on issues such as Iraq, Afghanistan, and human rights were then stalled, leaving all parties in a worse situation.

In the future, any potential iteration of the reactor deal should be treated as the tactical confidence-building measure it is, not a strategic sine qua non. Failure to cut a deal on this single issue should not mean that the entire agenda of U.S.-Iran negotiations grinds to a halt.

2) Get by with a Little Help from Your Friends

Iran’s relationship with every one of the “P5+1” countries ranges from bad to worse. Particularly between the United States and Iran, habits developed over 30 years of enmity are tough to break. There is a huge reservoir of mistrust, suspicion, and hostility. Resolving the nuclear dispute through a mechanism almost completely void of trust is a formidable task. Although the Security Council process cannot be sidestepped, it can be complemented by relying on states that — due to their cordial relations with both the permanent members and Iran — can inject trust into the diplomatic process.

Turkish and Brazilian diplomats, who worked furiously from November 2009 to May 2010 in an attempt to breathe life into a fuel-swap deal, have spent more time engaged in diplomacy with Iran recently than the entire P5+1 combined. This experience strengthened their relationships with all relevant Iranian parties and gave them valuable insights into the Iranian perspective. If the negotiations are to succeed, the trust that Turkey and Brazil have built will be indispensable.

3) Talk to Everyone in Iran — Directly

As the only permanent member of the U.N. Security Council that does not have a direct channel to Iran, Washington is at a significant disadvantage. Obama administration officials recognize that, on numerous instances this past fall, opportunities to salvage the fuel-swap deal existed — if only the United States and Iran could speak to each other directly. Going forward, efforts should be made to quickly establish such a channel. And the belief that dialogue is only possible if a singular authentic channel to Iran is found must be discarded. Such a channel doesn’t exist.

Rather, Washington should recognize that there are many power centers in Iran, all of which need to be included in the process. Just as no country expects to sign a significant deal with the United States without addressing the concerns of the White House, State Department, Pentagon, and Congress, no major decision is likely to be made in Iran unless a range of key stakeholders is brought into the discussion. This partly explains Turkey and Brazil’s success in getting Iran to agree to the U.S. modalities of the nuclear swap. Their diplomacy with Iran was not focused on a single stakeholder in Tehran. Rather, these countries built confidence with and won support for their mediation from all relevant Iranian power centers.

If direct engagement with the Majlis, the supreme leader’s office, and other political centers and factions isn’t immediately possible, negotiators must be willing to give them time, so that these stakeholders’ inclination to scuttle a deal that they were not a part of is neutralized. Pressing Iran’s fractured political system to give a quick yes usually results in them saying no. A first step toward strengthening the diplomatic efforts would be to revise the “no contact” policy that prohibits U.S. diplomats from interacting with their Iranian counterparts.

Reducing 30 years of wide-ranging U.S.-Iran tensions to a single-variable negotiation is not a formula for success. As the agenda enlarges and the conversation continues, the United States must address the Islamic Republic’s human rights abuses. The human rights violations committed by the Iranian government in the aftermath of the June 2009 presidential election were a clear violation of Iran’s international obligations — regardless of whether there was fraud in the election, regardless of who had won the election, and indeed, regardless of whether there had been any election. The Obama administration hasn’t pressed the issue, both to protect pro-democracy activists within the country and to avoid seeming to interfere, something neither the Green Movement’s leaders nor the government would likely be enthused about.

But the lack of an adequate response has done more harm than good. In the eyes of some in the Iranian Green Movement, Washington seemed so eager to secure a nuclear deal that it was ready to sacrifice the Iranian people’s human rights in the process. The setup appears analogous to the state of relations that existed under the shah: a relationship centered on security at the expense of basic freedoms, and the cardinal sin that poisons relations between the two countries to this day.

A healthy, long-term relationship with Iran cannot be built if the current reservoir of American soft power among the Iranian population is squandered for the sake of a nuclear deal. Just as Iranians’ respect and admiration for American achievements, values, and culture would be jeopardized in the event of a military attack on Iran, silence on human rights will likewise deplete this crucial strategic asset.

This is particularly important because an Iranian opening to the United States will likely be accompanied with a tightening of domestic restrictions as the government will not want its policy to be understood as a sign of weakness.

Obama shouldn’t kid himself, or the American public: Diplomacy with Iran is hard, and it’s going to get harder. Since Obama took office, political space in Washington to pursue diplomacy with Iran has consistently shrunk. This has primarily been caused by the actions of the Iranian government, including the election fraud and post-election abuses committed by Tehran. And, after the Republican midterm election victory, it’s only going to shrink more.

The Obama administration must go into the talks focused on the long-term benefits of engaging Iran. It also must be willing to make the political investment necessary to give the process a chance to succeed. If the administration is going to retreat at the first sign of Iranian intransigence or congressional opposition — which are both probably inevitable — then it might be better not to embark on a new round of diplomacy to begin with.

An institutionalized enmity that has taken 30 years to build will not be undone through a few meetings over the course of a few weeks. Neither side should expect that its first offer will be accepted. A generation of officials in the United States and Iran has made their careers by proving how nasty they can be to the other side. It is very easy to slip back into old patterns if an attempt to break the deadlock doesn’t yield immediate results.

Success will only come if diplomats are willing to play the long game, placing a premium on patience and long-term progress rather than quick fixes aimed at appeasing skeptical and impatient domestic political constituencies, whether in Tehran or in Washington.