The Joke is on US 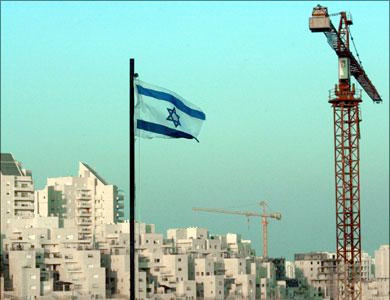 Have you heard the one about the Jewish genie? After a long set-up, the joke arrives at a point where the finder of the lamp asks the Jewish genie that, as his last wish, he would want to be surrounded by pussy. So, the genie turned him into a tampon and when the wisher complained of this fate, the genie replied: The moral of the story is that when you deal with a Jewish genie, there is always a string attached. That is also the case when dealing with Bibi Khanoum.

To recap the last season: Sultan Hussein decided that because he is taller and more articulate than his predecessor, Mighty Mouse, that he was the one that was going to stitch peace between the Israelis and Palestinians. So, a gallant effort was launched by the S.S. Clinton and Pretty Boy Blair and Sensei Mitchell do what others had failed since the lesser days of the Carter Administration. Uncle Abbas who had pouted for many years suddenly regained his spirits and decided that he could sit down with the likes of Bibi Khanoum as long as Bibi would keep the lid on the building of new settlements in areas that Uncle Abbas wanted for his Palestinian state. Problem was that the time for the lid was coming to an end and the lid got lifted and bulldozers began the work that they do in the construction world. Uncle Abbas pouted again and this time went to his brothers in the Arab League so that they can ask him not do anything rash which he would not do anyway. So Uncle Abbas told the world that he would give S.S. Clinton and Sultan Hussein one month to get Bibi to extend the moratorium on building more settlements so that Uncle Abbas and Bibi could sit down and talk peace. Bibi had a price.

Sultan Hussein did what Americans do so very well, spend money, which they really do not have but borrow in a manner that Americans also do so very well. In the days of the cold war, economic aid and military assistance would buy votes of countries at the UN; these days money is spent on projects to bring down governments with variegate velvet, burlap, or satin. Not to mention the billions that is being sent in two futile wars. All in the name of arriving at unrealistic foreign policy objectives! Peace is not a commodity to be purchased; it is state of being that has to grow organically from the very soil that sprung the violence.

So, true to the form that money can by you love, S.S. Clinton and her tugboats were making promises about American post-peace security guarantees to Israel, money, jets and other weapons, and allowing Israeli military presence in some bases along the border of the future Israeli-Palestinian states, and a U.S. commitment to torpedo (sorry, veto) any resolution at the UN that might recognize Palestinian independence or help force a solution on the situation.

All this offer of the American incentive or exacting of blackmail by Israel, depending on one’s pov, is even happening before Uncle Abbas and Bibi would sit at the table again! Will there be a price if a party is taking too long to return to the table from the bathroom too? It is likely that at every step one player or another is going to bulk and then has to be enticed back to the table for talks.

What I would like is for the U.S. to walk away from the table and then see what Bibi and Uncle Abbas are willing to pay in order to entice Sultan Hussein back to the table. Maybe for once the American taxpayer does not have to shell out money, hardware and commitments to keep a bunch of ninnies talking.

Here is what Sultan Hussein should do next: Tell the Palestinians and the world that if the two sides have not reached a workable solution to their state belligerence by a date certain that the U.S. would not prevent the Security Council and the General Assembly of the United Nations to recognize a unilaterally-declared independence of Gaza and West Bank as two independent Palestinian states.