MILLON & ASSOCIES: Is IRI Trying to Sell out Items from Tehran’s Museum of Modern Arts ? 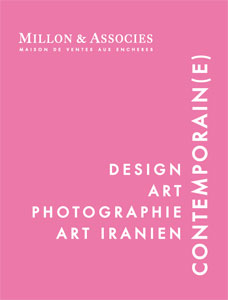 The Islamic Republic is most probably having an auction on November 25th at one of the most prestigious auction halls in Paris, Millon & Associes, Maison de Ventes aux Encheres in 15 Avenue Montaigne, (this is where the jewelry and personal items of the late Princess Soraya were auctioned a few years ago) interestingly the auction time is 7:00 pm which is traditionally the timeset aside for very very expensive art objects. Apparently those who are incharge of these particular auction claimed that everything was arranged through a private gallery in Tehran. However some unofficial sources claim they could detect the trace of the Islamic republic’s hand behind the auction in a very noticeable way. Two or more Items from Andy Warhol of lesser value as well as other contemporary European Artists are being auctioned. Most of the other objects of unequal quality and value in this auction are from very young Iranian artists but also from classical artists of sixties and seventies, all of whom are also Iranian. You have to consider that those artists do not work anymore and most of them had their own galleries, so their work could have been simply confiscated by the State after the Revolution. So the Works may be sold for half their initial value on grounds of belonging to younger artists.

I went through some of the items presented on the official website of the Auction House Here:

One of the Warhol’s in question “Joseph Beuys in Memoriam”,1986 seems to have been purchased after the Revolution. However other items such as Gilles AILLAUD ‘Orang-Outang derrière la grille’ dates from 1965 and could well be from an older collection.

Only a well informed art expert (which I am not) or someone familiar with the Tehran Museum of Modern Arts collection can only vouch for the exact origin and value of the objects being sold out. But if true, the future of the Museum as well as the risks of squandering them by the Islamic Republic which wishes to compensate for it’s current economic difficulties due notably to the sanctions it is subject to, may explain the Frenzy of trying to make ends meet over these « decadent » and « un Islamic » art Works.

PrevPreviousE=MC2, NOT in Tehran
NextThe Deadly Lie of Democracy in IraqNext