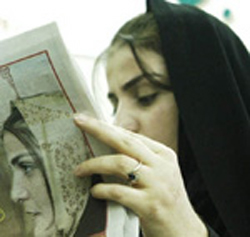 UPDATE: The Iranian regime has murdered Shahla Jahed by hanging on December 1, 2010.

Do what you can to save Shahla Jahed’s life. Execution date said to be December 1st. Take 5 minutes and fill this out. It could make a difference.

A Statement by the International Campaign of Human Rights Lawyers on the Imminent Execution of Shahla Jahed:

Considering the various flaws and misgivings as well as the existing documents and evidences, the International Campaign of Human Rights Lawyers (ICHRL) asks the head of the Judiciary to immediately halt the execution of Shahla Jahed. There are serious questions and doubts about the veracity and accuracy of the verdict and death sentence.

On February 3, 2003, Shahla Jahed, before the judicial and police authorities and in the presence of national media, stated that she is not the murderer of Laleh Saharkhizan and has insisted many times that she was not involved in the murder. Based on the statement of Major Abharian, one of the officers assigned to the investigation of the case, the fate of Shahla Jahed changed forever after she received a private and illegal visit at Tehran’s Agahi (the police criminal investigation unit) by Nasser Mohammad Khani and one of his friends. After this meeting and due to her extreme affection for Nasser Mohammad Khani, and apparently because of his private request in the meeting, Shahla Jahed denied admitting earlier (of non-guilt) and confessed to the murder.

Major Abharian states that he obtained evidence that pointed to the innocence of Shahla Jahed. However, the case was taken away from Major Abharian and he is not allowed any involvement in the case anymore. Major Abharian is one of the senior officers of the Tehran police force and has longtime experience in investigating serious crimes, and honour, serial, and organized killings. He explicitly stated that Shahla Jahed is innocent and believes that the police and the security agents have planned [all along] to blame Shahla Jahed for the murder of Laleh Saharkhizan who was killed by the security organizations. He also believes there were evidences in favour of the defendant’s (Shahla) innocence that were intentionally not collected. He adds that the crime scene was compromised and destroyed from the start of the investigations. The traces of the crime were cleared and the evidences that showed Shahla Jahed’s innocence were destroyed by some of the plainclothes agents acting under the supervision of Colonel Kashfi, Tehran’s Criminal Investigation Unit deputy director.

ICHRL, out of duty and to prevent the death of an innocent human, condemns any form of the death penalty. It joins the opponents of the death penalty across the world to remind [the authorities] that the death penalty is irreversible, and once carried out [and] the defendant is proven to be innocent, there is no return. Given the serious flaws and doubts in the course of the investigations and due to the explicit contradictions in the evidences presented, including the statements of the investigating officer, the verdict and the death sentence were issued in a manner inconsistent with the legal procedures and do not have the required legal credibility. The hesitation of the former Head of the Judiciary as to whether Shahla Jahed was really behind this murder and his orders that the case be re-investigated and retired is a testament to [our] claim.

ICHRL once again insists that the execution of Shahla Jahed has to be halted and asks all international human rights institutions and organizations to protest such unfair proceedings and prevent the Islamic Republic Judiciary from, once again, unfairly taking the life of an innocent person.