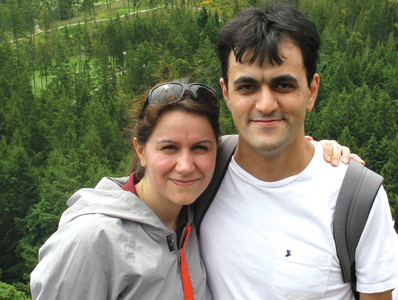 In this picture is Fatemeh ‘Zohre’ Eftekhari and her husband Saeed Malekpour, before Saeed travelled to Iran from Canada to visit his ailing father. While in Iran (2008), he was arrested and falsely accused of an Internet related charge. Since then he has been condemned to death. Yesterday, his lawyer was informed that the death sentence was confirmed! According to the presiding judge Moghiseh, he had no part in the decision. The ruling came directly from the Islamic [or Iranian] Revolutionary Guards Corps (IRGC), “a branch of Iran’s military, founded after the 1979 Revolution.” CORRUPTION!!

WE KNOW THE REGIME IS UP TO SOMETHING BECAUSE THEY ARE AIRING HIS FALSE CONFESSIONS ON TELEVISION MORE OFTEN!!

ADDITIONALLY! In March 2010, Saeed Malekpour, who has endured much injustice and abuse since his incarceration, wrote a LETTER to Iran’s head of Judiciary (Larijani) detailing the tortures he endured while under interrogation (http://persian2english.com/?p=8921). He also wrote a second letter to the head of Judiciary requesting a fair trial. As punishment for writing these two letters, the Revolutionary Guards made the decision to open up a new case for Saeed, under the charge of “propaganda against the Islamic Regime” and “conspiring with his spouse against national security”!!

How is this conspiring with his wife? Because after his wife sent the letters to the head of Judiciary (Sadeq Larijani), the Supreme Leader (Ali Khamenei), and the Tehran Prosecutor (Abbas Jafari Dolatabadi) and she or Saeed did not receive any response, she took the letters to the international media in order to get her voice heard!!

Saeed is a permanent resident of Canada and needs the help of all of you to avoid further injustice! HE IS FACING DEATH, HE IS IMPRISONED…FOR WHAT? FOR NOTHING!! NOTHING BUT PURE INJUSTICE!

Let us unite for Saeed. Let us do whatever we can to make sure his story spreads. He needs our voices, because his voice has been silenced!

We need to push this full force right now. We need to get the Canadian government to publicly condemn the Iranian government more for its illegal and inhumane behaviour!

The case is too complicated to explain here (because the regime has made it complicated), but I will provide links so you can learn more about the case. SAEED IS BEYOND INNOCENT! HE IS A VICTIM OF A CORRUPT AND INHUMANE GOVERNMENT SYSTEM!!

Who will hear his cries from inside a prison cell?

Letter to WIRED Magazine Asking for Coverage of the Story of Computer Programmer Saeed Malekpour
http://missionfreeiran.org/2010/10/27/wired-saeed-malekpour/