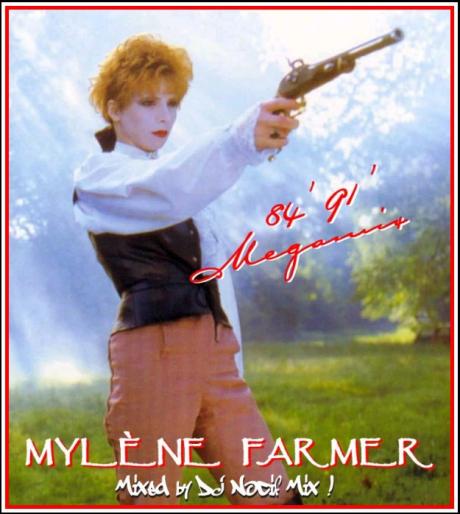 “Libertine” 1986:
“Libertine” is a 1986 song recorded by French artist Mylène Farmer. It was the third single from her first studio album Cendres de Lune and was released on 1 April 1986. It was particularly known for its huge music video, produced as a film and which contains explicit sexual and violent scenes. It met success on the French chart, becoming thus Farmer’s first big hit. In 2002, the song was successfully covered by Kate Ryan, who reached the top 20 in several European countries.
Plot:
The action takes place in mid-18th century France. Libertine (Farmer) is a young woman who dresses in male clothing and spends her time in debauched parties. When the film begins she and a man are about to engage in a duel with pistols, witnessed by a Woman in Red. Libertine kills the man and runs away on a white horse, while the Woman in Red threatens revenge. Later, in a castle, Libertine has a bath with two other women, anatomies on full display. They then dress, Libertine in male attire, and go to a banquet hall filled with people engaged in various pleasures. A man sends Libertine a message and follows her to an upstairs room, rejecting the Woman in Red’s advances. The man and Libertine make love. (At this stage Farmer is shown fully naked, including full frontal, and the music stops to give way to sounds evoking eroticism, (moans and howles of wolves)). When Libertine returns to the party she is attacked by the Woman in Red. They fight violently and some blood flows. Seriously hurt by a fireplace poker, Libertine and the man manage to escape on horseback, but the Woman in Red stages an ambush with accomplices and they are killed. The two murdered bodies are shown in close-up. The bodies are later found in the video for “Pourvu qu’elles soient douces“.

In the video, the scene takes place on 18 August 1757. A young English drummer discovers the still body of Libertine, covered in blood. He calls William, an older soldier, who believes that Libertine is a man, while the young boy says she is a girl. Soon they realize that she is alive and take her to the camp for treatment. Meanwhile, the captain of the British Army realizes that his troops have taken the wrong road and are in France rather than being in Prussia (the words, in English, are subtitled in French language). Then, as the song begins, the captain brings a fruit bowl to Libertine who is sleeping in a tent. With his whip, he raises the sheet to look at her buttocks, but the young drummer enters the tent and surprises him doing that. To punish him, the captain flogs him in front of many other soldiers. He then hands the whip onver to Libertine, expecting her to also flog the boy, but she turns and whips the captain’s face. In the tent, the man, very angry, throws some clothes to Libertine and looks at her when she undresses. Then she breaks a bottle over his head and runs away on horseback. The captain pursues her, finds her lying hurt near a tree, and carries her in his arms back to the camp. While they make love, the rival of Libertine, in connivance with the French army, brings prostitutes in the camp to distract the British troops. The next day, the French army bombs the English camp, while the rival shoots the captain and kills him. Libertine, who watches the scene, fights and eventually kills her with a bayonet. As the burning camps are left filled with dead bodies scattered on the ground, Libertine picks up the young drummer, while the soldiers of the French army watch at them leaving on horseback.

About the Video Clips:

The longestand certainly most ambitious music video Mylene Farmer created with LaurentBoutonnat, this one is a direct sequel to the video to “Libertine”(1986), which marked the first highly celebrated collaboration of the two.While that video broke new ground with its unprecedented sex and violence(specifically the full frontal nudity of the lead singer!), this is like anysequel: More of the same (well, almost, this time another girl goes fullfrontal), but bigger and bolder. So instead of nine minutes, this is almosttwice as long, has longer dialogue scenes in the beginning and the end andfeatures higher production values. This video looks like it took the budget ofwhat most french art-house movies used at around the time. The results areundeniably impressive: The battle scenes at the end are fabulously staged,rather graphic and look like straight out of a feature film. The song itself,like its predecessor, is somewhat of a scandal to conservative ears, it’sbasically an ode to butt cheeks with the implied notion of eroticism revolvingaround them, either through caning (like in the video) or anal sex, as impliedin the video as well. As usual, Farmer does bare her behind, too. But don’t letthe R-rated sex and violence scare you off, this is the most persuasiveargument for music video as an art form, not merely a ploy to sell product.Like all her collaborations with Boutonnat until 1990, including”Tristana” and “Désenchantée”, this is highly recommendedfor the way it promoted what music videos could do.