Our Invisible War on Iran 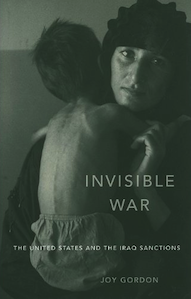 Marc Lynch, a highly respected MidEast expert for the Foreign Policy Magazine gives a brief review of a book on Iraq sanctions:

Joy Gordon, Invisible War. While most Americans have largely forgotten the long decade of U.S. led sanctions on Iraq, Gordon forces attention back to their long-lasting effects on the Iraqi state and society. She offers a deeply researched account of American and United Nations policies towards the sanctions which captures the contradictions between an overt focus on forcing Saddam Hussein to surrender his WMD programs and a deeper interest in maintaining containment (“keeping Saddam in a box”) and pushing for regime change — contradictions which remain deeply relevant to current debates about Iran. Gordon tracks the effects of the sanctions on Iraqis, which drove international outrage as the decade of the 1990s dragged on but which most of the world now seems eager to forget. Joy Gordon in the Middle East Channel: “Lessons We Should Have Learned From the Iraqi Sanctions” (July 8, 2010).

I have this book and can’t recommend it highly enough to Iranians. Any advocate of sanctions must read this book in order to understand what us anti-sanctions advocate go through in trying to dissuade people from even thinking about such damaging measures.