Speak out on legal rights in Mazandraran Lake 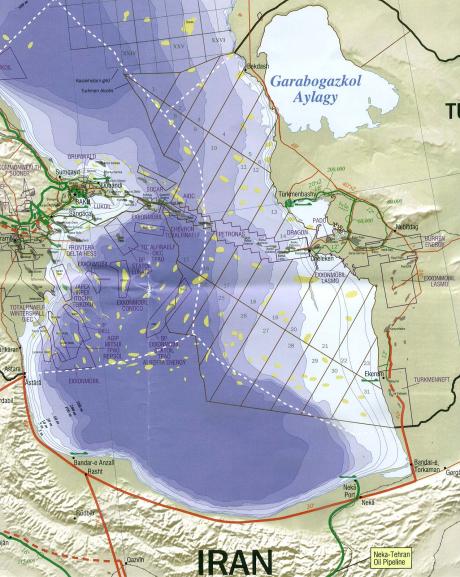 I am writing to live up to my responsibility as an Iranian citizen and to plead to all of you to voice your rights and duty as a citizen of Iran.
I am an Iranian like yourself here in the USA who loves his country and look forward to a free and democratic IRAN someday for me and my future generation of Iranians to live in.

What has prompted me to write is, what I believe to be an Imminent danger to the territorial sovereignty of Iran as a nation. Independence and territorial sovereignty are vital to the any nation.
It is my opinion that while the people of Iran are busy fighting for their basic civil and human rights, our territorial sovereignty is being seriously threatened and this is forever separate amount of waters equivalent to the size of Isfahan (180,000 km square) from Iran. We are at the cross roads with history with regards to our rights in Mazandaran Lake.

Mazandaran Lake is the world’s largest lake with huge reserves of oil and natural gas. For Iran, Mazandaran Lake has historical, political, and economic significance. Iranians have been living on its southern coast for 3,000 years. It has rich fish supplies, caviar, which is an important source of nutrition and trade for the people of Iran.

As you are well aware, In 1940, in a treaty signed between the Late Shah of IRAN and Stalin of USSR, two nations agreed to a 50-50 sharing of the Mazandaran Lake. This agreement is binding today. After the Soviet breakup, by international law. we are entitled to our 50% and the Russia must share its 50% with the new republic.

If Islamic Republic Regime signs this treaty, it will be extremely difficult if not impossible to reverse such treaty. I believe it is time for us to step up to our responsibility as Iranian citizens to rally behind our legitimate right to protect our territorial sovereignty before it is compromised for good, much like what happened with the Turkamanchai treaty in the recent history of our nation.

As you know, There is a historic meeting scheduled in three ( 3 ) months, during which . Islamic Republic Regime is scheduled to sign away 30-39% of our territorial waters to the newly formed former soviet republics (just as Azerbaijan was lost in the Turkamanchai treaty due to the ineptness of Qajar Regime in Iran).

Following the news from Iran, One can observe, time and again that, the current leaders of Iran Do respond to the voices when “united and repeated”. It is the least we can do as the most educated and politically aware generation of Iranian in the history of our nation, it is our duty to history, and to future generation of Iranians to avoid a disastrous treaty much like what happened with “Turkamachai treaty” .

Not speaking out, at this critical juncture in history of our nation will only enchant the enemies of Iran. Be it the Arabs in the South who have had their eyes on the Islands and Khuzestan or the Soviets in the North on Mazandaran lake and its Oil and gas reserves.

For this reason, we owe it to future generation of Iranians to do our historical duty and voice our protest against such treaty to compromise our territorial waters in Mazandaran Lake.

I am writing to

plead to you and others in your position with access to the Media as well as your position as a political expert on affairs relating to Iran to please voice your views on this subject in the media.

The goal being to bring this vital topic to the attention of :

1. The Iranians inside Iran in particular and,
2. Iranians abroad in general as well as
3. The Western nations and their respective politicians

In demanding our sovereign rights to our territorial waters and national interests.