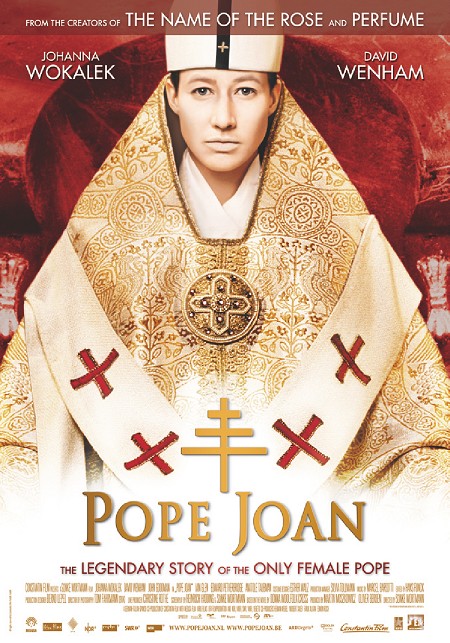 A 9th century woman of English extraction born in the German city of Ingelheim disguises herself as a man and rises through the Vatican ranks.

Interview and extras with Cast and Crew (In German):

Premiere at the Berlin Film Festival with Cast and Crew:

For 1,200 years her existence has been denied. She is the legend thatwill not die–the woman who disguised herself as a man and sat for two years on the papal throne. Based on Donna Woolfolk Cross international bestseller, « Pope Joan » brings the Dark Ages to life in all their brutal splendor, and shares the dramatic story of a woman whose courage makes her a heroine for every age.

Miscellaneous Footage related to the Female Pope and Feminity and Church

Legends of a female pope, epidemics of dancing mania, and the truth behind the Pied Piper are examined

Women Clergy Reach Out To Pope:

The Catholic Church has long been a mainly male-dominated institution, but female officials from this religion are trying to change this practice. Allen Pizzey reports.

More about the Legend of Pope Joan:

PopeJoan is a legendary female Pope who supposedly reigned for a fewyears some time thought to be between 853 – 855 AD. The story first appeared inthe writings of 13th-century chroniclers, and subsequently spread through Europe. It was widely believed for centuries, though modern historians and religious scholars consider it fictitious, perhaps deriving from historicized folklore regarding Roman monuments or from anti-papal satire.

The first mentionof the female pope appears in the chronicle of Jean Pierier de Mailly, but the most popular and influential version was thatinterpolated into Martin of Troppau‘s Chronicon Pontificum et Imperatorum somewhat laterin the 13th century. Most versions say that she was a talented and learned woman who disguised herself as a man, often at the behest of a lover. Due toher abilities she rises through the church hierarchy, eventually being chosenas pope. However, while riding on horseback one day, she gives birth to a child, thus revealing her sex. In most versions she dies shortly after, eitherby being killed by an angry mob, or from natural causes, and her memory isshunned by her successors. More Here

THEOCRACY ON SCREEN: Xavier Beauvois’ “Of Gods and Men”

THEOCRACY ON SCREEN: Ken Follet’s “The Pillars of the Earth”

THEOCRACY VS ROYALTY ON SCREEN: Richard Burton and Peter O’Toole in “Becket” (1964)

THEOCRACY ON SCREEN: Rex Harrison as the Warrior Pope in “The Agonyand The Ecstasy” (1965)

THEOCRACY ON SCREEN: Anthony Quinn is Pope in “TheShoes of the Fisherman” (1968)