THEOCRACY ON SCREEN: Nicholas Cage in “Season of the Witch” (2011) 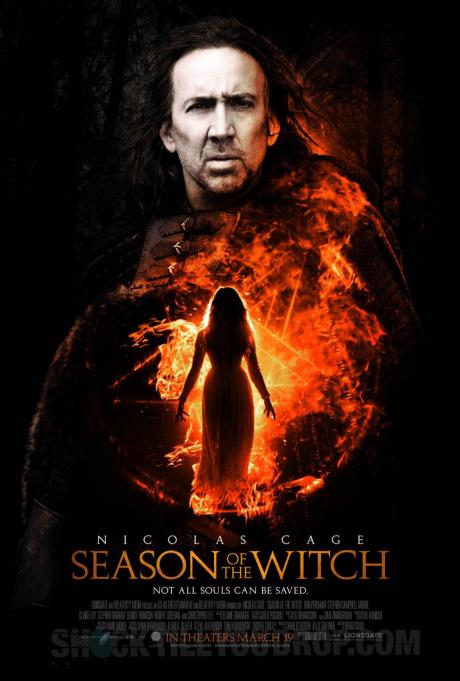 14th-century knights transport a suspected witch to a monastery, where monks deduce her powers could be the source of the Black Plague. Film’s Release Date: 7th January 2011

Official Trailer:
Official Trailer 2: Actors Nicolas Cage And Claire Foy chat about Season Of The Witch:         Plot:
A 14th century Crusader returns to a homeland devastated by the Black Plague. A beleaguered church, deeming sorcery the culprit of the plague, commands the two knights to transport an accused witch to a remote abbey, where monks will perform a ritual in hopes of ending the pestilence. A priest, a grieving knight, a disgraced itinerant and a headstrong youth who can only dream of becoming a knight join a mission troubled by mythically hostile wilderness and fierce contention over the fate of the girl. When the embattled party arrives at the abbey, a horrific discovery jeopardises the knight’s pledge to ensure the girl fair treatment, and pits them against an inexplicably powerful and destructive force.

THEOCRACY ON SCREEN: Xavier Beauvois’ “Of Gods and Men”

THEOCRACY ON SCREEN: Ken Follet’s “The Pillars of the Earth”

THEOCRACY VS ROYALTY ON SCREEN: Richard Burton and Peter O’Toole in “Becket” (1964)

THEOCRACY ON SCREEN: Rex Harrison as the Warrior Pope in “The Agonyand The Ecstasy” (1965)

THEOCRACY ON SCREEN: Anthony Quinn is Pope in “TheShoes of the Fisherman” (1968)