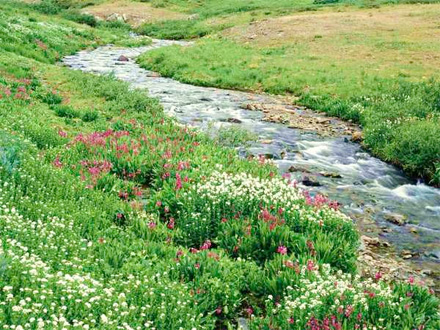 Each night at the beginning of the summer, Hassan Tavakoli would read to his two children from The Arabian Nights. The air was warm and it was nice to read to his children and remember evenings in Iran. They lived in a small house in Cienega, California. It was a quiet town and where they lived was close to a creek where Hassan would take his children sometimes.

One night as he was reading, his daughter Soheila asked him, “Baba, who are the attendants?”

“The attendants. You said that when the prince came back to the castle, the attendants prepared a bath for him.”

“They are the people who work in the castle.”

“What did they do all that time the prince was gone?”

“They waited for him. They made sure everything would be ready for his return.”

“But he was gone a long time. All that time they were getting everything ready?”

“Yes. They were doing other things too.”

“I don’t like that they have to do everything for him,” his daughter said.

“That is what makes him a prince.”

“I understand how you feel,” Hassan said. “But you liked the story of the enchanted horse, didn’t you? You liked the way it flew up into the air. That was a prince who was riding that horse. These are very old stories. The princes have attendants, so it’s as if we could say without the attendants, we wouldn’t have these stories. Would you trade no attendants for no stories?”

He didn’t ask it rhetorically. He honestly wanted to know.

The girl’s brother, who hadn’t said anything the whole time, who was named Pooriya, and who was eight years old, two years younger than his sister, said, “I would. I would trade no attendants for no stories.”

“Baba,” Soheila said, and she smiled as though just for a moment she was the adult and he was the child. “People would still make up stories. They would just make up other stories. I did like the enchanted horse. But I would like the whole thing better if there were no attendants.”

“Me too,” Pooriya said. “I would like it if nobody was ever an attendant.”

They were a brother and sister, Hassan thought, and they already understood each other in ways he did not know.

“Do you want me to stop reading?” he said.

“No,” Soheila said. “I want to hear about what happens with Sinbad.”

Hassan read to them of Sinbad’s second and third voyages, but he kept thinking about the attendants and he felt conscious of the conspicuous displays of royalty.

When he stopped, he looked out the window and saw that it was still light out. “Let’s go to the creek,” he said.

They walked to the creek and on the way Hassan thought that his children looked like they’d forgotten all about the attendants though he knew of course that they hadn’t. He had thought his children would hear the stories and see only the princes and princesses but they had seen the attendants. The thing he wondered if his heart could match was the way they talked to each other as if it was obvious. They talked like they had already been seeing them before they heard the story.

At the creek they did their usual thing: Soheila stood with her father and threw stones into the water and Pooriya climbed along the bank, looking for a place to cross. He had only made it across once, when the water was low and there was a log fallen halfway across. The next time they had come, the log was turned and Hassan had offered to put it back like it was. No, the boy had said, I don’t want to make a bridge, I want to find a bridge.

Now the log was all the way over on the other side. The boy was glad that he had to look for a completely new route. He scampered all over the bank, investigating different possibilities, and he came up empty, but when he came back to where his father and sister stood, he was very happy for his search.

“Look at where the log is now,” Soheila said. “Baba, do you think you could bring the log back to where it was now?”

“I don’t know,” Hassan said. “It is pretty heavy. I think I would need a couple of attendants.” He smiled at his children.

“I don’t want any attendants!” he said.

Hassan saw a look of alarm on his daughter’s face as well.

They walked back when the boy stopped crying. It was beginning to get dark. Hassan laughed inwardly about his two children, even as he knew that his laughter was going to turn into something else before the end of the night, which it did.

“We have to make a visit to Iran some time soon,” he said to his wife after his children had gone to bed.

“My heart is too big to be their father here.”