Social Media to Take on Governments 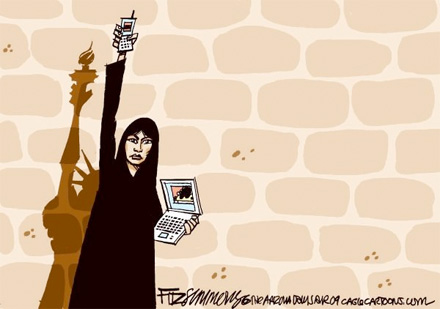 It has been a roller-coaster decade for the media in the Middle East and North Africa — many who have turned to the Internet to write about human rights and corruption find themselves facing increasingly restrictive measures by the authorities.

The meteoric rise of Twitter and Facebook as global communications phenomena created a sub-genre of communication theory and viewer/user interactivity which reshaped the way news organizations planned coverage.

But while millions of people helped shape the media landscape in Europe and North America, in other parts of the world journalists critical of their governments were often accused of “harming the public interest”.

They were blacklisted, intimidated, detained, tortured, and in some countries, killed.

Young bloggers and media activists bore the brunt of official media crackdowns. In 2008, I co-authored an about the threats and dangers bloggers faced in the Middle East and North Africa.

According to one academic who has extensively studied social media in the region, authorities in the Middle East and North Africa were taken by surprise by blogger-activists in the first half of the decade. Bloggers were at first allowed to write freely and comment on socio-political and religious issues.

“With the possibility of thousands more stations and other technologies catching on in a second … I think that those in government responsible for information regulation have realized that they are a decade behind. They are now trying to address this new era,” says Naila Hamdy, an assistant professor of journalism at the American University in Cairo

Nora Younis, an Egyptian blogger and journalist, believed then that “bloggers are nowadays taken seriously by authorities as well as Arab media”, a significant change from a few years ago when she said the community was virtually ignored.

But as blogging became more popular and influential, unprepared authorities in the Middle East and North Africa — who were used to mainstream media acquiescence — reacted by harassing and in some cases imprisoning bloggers.

Bloggers in Tunisia, Iran, Syria, Egypt, Saudi Arabia and Bahrain were particularly vulnerable. In Iran, blogger Omidreza Mirsayafi died while in detention in circumstances the Tehran government has not yet provided.

Other Iranian journalists I have worked with in recent years have gone missing: In 2008, Iranian-Canadian web writer , disappeared while in Tehran. It was later revealed he had been detained by authorities. He was recently after receiving a 19-year sentence on espionage charges.

The Committee to Protect Journalists (CPJ) says Iran is the most and media activists.

Just two months ago, Egyptian authorities released , a blogger jailed in 2007 for defaming Islam and the presidency. His release came just a few weeks after several stations were taken off the air by the national satellite carrier NileSat for allegedly failing to abide by their contracts and/or failure to pay licensing fees.

The situation facing bloggers is perhaps best highlighted by the crackdown in Tunisia.

In Tunis, Nazira Rijba, a Tunisian writer and activist, was in late 2008 charged over an article she wrote in support of the Tunisian news website Kalima which had been subject to censorship by the Tunisian authorities.

During national elections a year later, Kalima founder Sihem Bensedrine reported to the CPJ that she had been harassed by plainclothes police; a contributor to the news website also says he was attacked by security personnel.

Other web writers and journalists have alleged kidnapping, intimidation, assault and confiscation of equipment in Tunisia.

Two weeks ago, the iron-clad hold of Zine el Abidine ben Ali’s government seemed to weaken as tens of thousands protested repressive economic and media policies. The Tunisian crackdown on bloggers and media activists appears to have backfired.

The CPJ says in its annual report that coverage of human rights issues in said region has increased despite government measures to stifle free speech. Twitter has been a catalyst in this coverage.

When I first joined Twitter, I followed a number of Egyptian journalists. One investigative reporter who has aggressively covered human rights issues was Tweeting a nearly minute-by-minute account of a protest she was covering. A handful of protesters were surrounded by a black-clad, baton-and-shield wielding throng of security. The protest received scant mention in mainstream media.

At another protest, the same journalist tweeted how her camera was confiscated but that no one seemed to have a problem with her ‘texting’ on her phone.

It is in such incidents that Middle East journalists, bloggers and activists are using Twitter and Facebook to not only continue to break cultural and religious taboos, discuss the social and political malaise afflicting their region, and explore sexual identities but also to create an entirely new paradigm in activist discourse.

While there is no consistent methodology that can accurately analyze the number of Twitter users by region, the Internet Advertising Bureau estimates that year-on-year growth of Twitter users in the Middle East and Africa surged by 142% to five million.

The number of Facebook users in the Middle East and North Africa reached 15 million in May 2010; in Egypt, there are more than 3.4 million users, says Spot On, an integrated communications company that also tracks social media use.

By publishing online — and dissenting in 140 characters or less — journalists in the Middle East and North Africa are challenging dominant state institutions.

This is likely to grow in the next decade as more in the Middle East log on and give the media landscape a much-needed makeover.

The Tunisian experience indicates that in the next decade the Middle East and North Africa are likely to witness a constant tug of war between media reformists and the public on the one front and repressive policy-makers and authoritarian figures on the other.

AUTHOR
Firas Al-Atraqchi is Assoc. Professor of Practice in Journalism at American University in Cairo. Follow him on Twitter: www.twitter.com/firas_atraqchi

PrevPreviousABBAS MILANI: “Problems and Prospects for Democracy In Iran”
NextWikiLeaks: Iran Can Attack Israel With Less Than 12 Minutes WarningNext