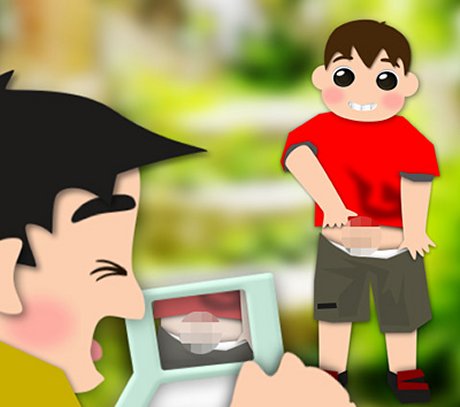 Sexualized behaviour can be reduced only if it is also treated within the family system, which has essentially caused its appearance and continuance. The therapist needs to deal with every family member’s needs and rights and behave sensitively towards all members of the family. In order for the therapist to engage the whole family in therapy, and to create an accompaniment for future in-depth therapy, he or she provides psycho-educational groups as the first step in family treatment.

The therapists raise the same issues in both children’s group and adult group, although they use different methods. Children are provided with games and playful assignments to learn the lessons, whereas adults directly discuss the chosen topics. Each group lasts one hour and is divided in three parts. During the first fifteen minutes, participants review what they did the previous week, get ready for the lesson; a snack is served to the children. The middle part, which lasts twenty minutes, consists of a structured lesson and discussion. During the last fifteen minutes, the two groups get together, parents and children tell each other what they learnt and thereby clarify and reinforce the lessons. This exchange of information between parents and children encourages open communication regarding uncomfortable sexual subjects.

The topics covered in psycho-educational groups consist of:

After completing the psycho-educational groups, parents and children participate in separate group therapies that run parallel.

Both parents need to participate in group therapy even if they are separated. Parents’ group therapy generally lasts two hours, half an hour longer than the children’s group. As most parents work during the day, an evening group is more convenient. Group therapy sessions are focused on the sexualized behaviour of children, but at the same time deal with many emotions and concerns of the parents.

These objectives consist of parents’:

Parents become aware of the need to eliminate all sexual stimuli from the child’s surroundings. These include porno magazines, dirty jokes, TV shows with sexual content such as soap operas, shows and movies that contain scenes of violence. They learn to monitor their children to dress age-appropriately, and their daughters to wear shorts under skirts. Parents understand that they should avoid sexual interaction in front of the child and only display greeting hugs and fast kisses. They also understand that verbally and physically aggressive behaviours will create anxiety and the subsequent desire for sexual behaviours. Parents realize that sexualized children may need to be supervised, their bathroom activities done separately from other children, not be allowed to walk around nude, not be allowed to sleep in the same bed with other members of the family or in the same room with another child. Parents learn that they should be emphatic about which behaviours are permissible and which are not. Parents might find it funny when their child tries to pull down the bathing suit of another child while playing under the sprinkler, and punish the child when he/she tries to lift another child’s skirt while playing in the living-room. To a sexualized child, these behaviours are alike. Consistency is critical. All sexualized behaviours must be forbidden.

These objectives consist of understanding parental sense of inadequacy, and feelings of guilt or confusion; recognizing strength and weaknesses of the family and the marital relationship; reducing concealment and manipulation among family members; increasing open communication and the ability to predict conflicts; and finally, identifying and improving those interactions that facilitate the sexualization of the family milieu.

All members of the family participate in the family therapy. The therapist helps everyone understand that the child’s “touching problem” is very much like a child’s stealing problem or lying problem. As in when a child steals, other children report to the parents if something has been stolen from them, these children should let the parents know if the child acts out sexually. The child with sexualized behaviours needs to be part of this plan, as this is done not to humiliate the child but to help him/her not to do the behaviours. The therapist states that parents are the only ones who can give consequences or rewards to the child. If the child molests other children in the family and cannot be stopped, the therapist recommends his/her placement in a group home where treatment is provided.

In later family sessions, the therapist and the family members discuss how they now look at the sexualized behaviours, what they will be doing to stop similar problems in the future, and what has been the contributing role of each member regarding the sexualized behaviours. The therapist needs to identify and reinforce positive changes and repeat the skills that have been learnt in therapy. If the abusive child and the victim are both in the family, it is beneficial if the child who molested apologize to the child-victim either verbally or in writing.

Group Format and Length of Sessions

It is beneficial to have many treatment cycles. The group can meet once a week, one and a half hour each session. Because sexualized children generally come from homes where few things are predictable, having a ritual that the group goes through every week, helps them have clear expectations and learn to conform to them.

Sexualized children should be placed in a therapy group where children are of the same gender, same size, same emotional and developmental level, same degree of pathology, and almost the same age (a maximum of one-year age difference is recommended). This is because the therapists need to monitor and process the dynamics of victim and victimizer during the sessions. Boys and girls under the age twelve generally do not like to share sensitive subjects about their bodies and sexuality. Because of the impulsiveness of these children regarding sex and aggression, it is most helpful to have only four to six of them in a group. Three therapists for six children are the best ratio. With this ratio, therapists can control the behaviour of the group and pay attention to the children’s individual needs.

Sexualized boys and girls need to learn to establish healthy rapport with therapists of either gender. A male therapist can join a girls’ group after the introductory phase of the treatment. This male co-therapist can model for the capacity of a male to talk about sexuality without acting on it. A female therapist is crucial in a group therapy because many sexualized children come from single-parent homes where the mother has problems with emotional and sexual boundaries. A stable female therapist provides this children with the opportunity to define themselves outside of the mother’s projections and ambiguities.

The best space for group therapy is a room large enough to contain a desk-height table and chairs, and small enough so that children may not be able to use it for recreation. Children remain more focused in a space with boundaries. For groups of younger children, a play area with small toys for the recess is needed.

Preparation of Children for Group Therapy

Children and parents meet in a waiting room. The therapists check in with the parents and exchange information while the children play. Then, children’s group begin with a snack and sharing time. Food represents affective nourishment and makes children feel comfortable in a group setting. Children talk about good and bad things that happened to them during their week. Then the structured activity begins. Afterwards, the children begin relaxing and playing. After playtime, the group’s unstructured activity begins. During unstructured activity time, children talk about what they have learnt and how the group went. It is a time to learn socialization skills. After group, children join parents in the waiting room and play together again as parents talk together. Therapists can gather helpful information about the parents’ interaction and parenting style.