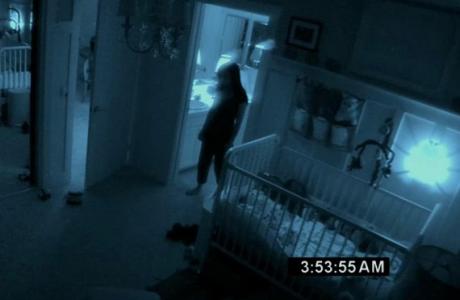 I watched Paranormal Activity in my girlfriend’s bedroom and it made me think that there mustnot be a God, but a Devil watching over us. Only a Devil would allow for suchmedia to enter into my eyes. Only a Devil indeed.

But of course there is no God, but that’s notthe point. The point is that I showed this mockumentary to my mother, Pari, andconvinced her it was real. Yes folks, I dids. So…do you still believe in God?

Anyways, I set up the MacBook for her in theliving room and dimmed the lights so she would get the full effect of its slow terror. Promptly, I left for the pool with father and returned to find her calmly making a potato omelette in the kitchen.

“I vas vaiting to see the ghost! Vhat happen?” she says to me in her Farsi accent and I couldn’t be any more disappointed.

For those who haven’t seen it yet, Paranormal Activity is a 2007 poltergeist film with only two main actors and one camera, portrayed in the ‘found footage’ style similar to the 2008 monster flick, Cloverfield.

Katie, the female role has had occurrences of ghostly behavior since she was a teen, and has recently purchased a home with her stud boyfriend, Micah.

During the night when the young couple retires,the weirdness creeps through the darkness and some ungodly shit goes down.

Me thought that this would give mother dearest a nice scare, but I failed miserably.

Since this film is a few years old, and that its sequel has been making a killing in the box office this past Halloween, I won’t be shy to spoil the ending for you.

You see, even when she thought that she just saw the weird death of two young people in their home, she wasn’t nearly as scared as I was when I saw it.

“That poor guy. Micah. His girlfriend vent crazy. Sometime it happen. Common withthis Christian guys. So crazy. Ve don’t have that. No. No. Devil and stuff. And then police come and vah vah” Pari continued slapping her left hand with her right.

In fact, what she reacted to most was thesuccess story behind the film. Paramount Studios said that if the film gets 1million requests for a screening on the ‘Demand It’ site, then they would show it in the corresponding cities. The buzz caught on and in only 4 days, more than a million demanded it.

The director used his own home to film the movie on an alleged $15,000 budget and then turned around to earn $193,355,800 in gross revenues, making it one of the most profitable films of all time based on return on investment. And Paranormal Activity 3 has already begun filming and will be out in October 2011. All this was much more entertaining to Pari than doors creaking or some shadows in the dark.

“Vealy? So much money! You should do that! Ve do in house now. No problem”.

The following Halloween night, the girlfriend and I took Pari and my father, Hossein, to see the sequel at SilverCity. They upped the budget 200 times over and threw in a kid and a dog for heightened suspense. Pari loved it, with jerks of laughter as she held her head with her palm. Hossien walked out mid-way in disgust.

“Vhatis that you pay to see? Life has too many ghost now, and you vanna pay $10 dollar to see more?” he flared in the parking lot.

On the way back home, Hossein told his dark tales of the many ghosts that he has seen in his life. Like the 3-year old hole that our neighbor has left in herbackyard, and how she finally decided to fill it in the other day. In the rain,no less. Or the fact that she would ask her dog questions in the afternoons.

You see, for my father, the strangeness that none of us would dare to understand is more than enough paranormal activity that he would ever want in his life.

“The vorld is sick now, you see? Ghosts, man of iron, Will Smith son do Chinese kick. It too much! Ve leave the Iran of bad guy and come to Ka-na-da to be happy free and you pay to vatch more bad guy? You have problem!”

Well, ladies and gentlemen he does have a point. Maybe us, first-world kids are thirsting for that thrill to drive some true grit into are safe, soft lives. And while not finding it around us, were sort to a torrent file or a shiny remote control. In short, life is too boring. We crave that scare. The adrenaline rush, I suppose. The mystery of theunknown.

“You better vhen you don’t know. You vant the scare yes? You sleep now, I come in room in dark and show. In morning you give me $10, ok toof guy?”

I nodded. I smiled.

And for the record, the only reason I’ve been crashing at my lady’s apartment since then, is because of the quality of the showerheads. Yes, the showerheads. And why not? Decent water pressure while bathing is far more important than the once-distant, tangible personification of the on-screen demons that now know where I sleep.

I ain’t scared of no ghost.