Mother of Killed Ashura Protester: “They even fear our children’s graves!” 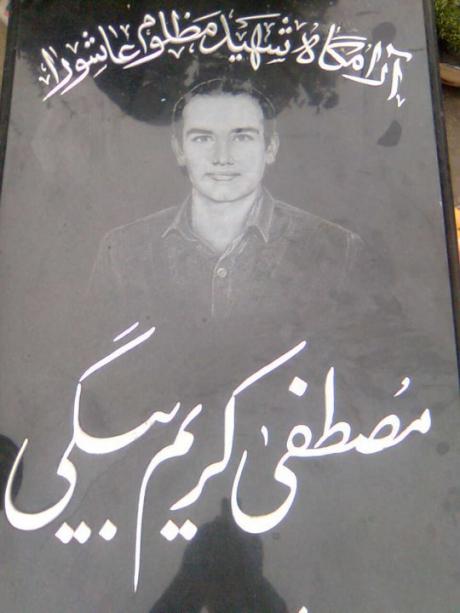 January 10, 2011 — In an interview with Rooz Online, the family of Mostafa Karim Beigi, who lost his life last year during Ashura on December 27, 2009, announced that Iran’s security forces are seeking to replace Mostafa’s gravestone. Mostafa Karim Beigi was a 26 year old young man who was killed last Ashura when he suffered a gunshot wound to the forehead.  His body was buried in Imam Zadeh Mehdi Jafar cemetery in the village of Joughin in Shahriar County in Tehran, Iran.

While the family’s formal complaint [filed with] authorities to identify the killer or killers of Mostafa Karim Beigi remains unanswered, Iran’s security forces have threatened the family and put them under pressure to replace his tombstone that has the word “Martyr” written on it.

Mostafa Karim Beigi’s mother, Shahnaz Akmali told the news website Rooz Online, “ ‘The Innocent Martyr of Ashura’ is written on Mostafa’s gravestone and so is ‘The Day of Martyrdom, December 27, 2009, Coinciding with Ashura’.  We received a phone call from [agents from] the Shahriar Intelligence agency who demanded from us to replace the tombstone.  They said that local residents had complained.  Allegedly, people said Mostafa was not a martyr…”

“They [claim the objections came from] local residents, even though [local residents] visit Mostafa’s grave to say prayers and sympathize with us. This claim cannot be true. My husband has informed the authorities that we cannot afford to replace the tombstone, but they [are willing to replace it on their own].  They have [also] threatened us,” she added.

Mrs. Akmali explained while under extreme distress, “The word ‘martyr’ means someone who has been killed unjustly. My child was murdered unjustly and had nothing to defend himself.  When they shot him, he had done nothing but protested peacefully without any weapon. And now, they will not leave his eternal resting place alone.  They do not allow him to rest in peace.”

Shahnaz Akmali added, “They took my son’s life, [so] what do they want from his dead body?  How is this right? Who will hear my pain? Who should I cry out to? How can I tell them to let my son’s soul rest in peace and leave us be?  Their [goal is to] break the tombstone, [so]  they pound on it.  What does this accomplish? Do they just want  to replace the tombstone?  Don’t place a new one there. As God is my witness, we do not want a tombstone, we want peace.  I told them to not mark the grave with another headstone.  The unmarked grave is better, covered with just soil.  The dirt is better, leave us be.”

Mrs. Akmali had filed a formal request with authorities to identify the killer or killers of her son. She told [Fereshteh Ghazi], “Who will look into my grievance?  The death certificate indicates that Mostafa died from ‘the impact of an object to his chest’, but in reality my son was killed by a bullet through his head. Who will bother to launch an investigation?  The coroner’s office reported the cause of death to be the impact of a hard object, but did not mention the bullet. While I was in the coroner’s office, I saw a picture of the hole in the left side of son’s forehead. He was buried 16 days after his death and his head [still] had blood on it. His father and I saw it with our own eyes.  The authorities never accepted the facts. They [insist] that there were no shootings during Ashura.  So, who would want to probe into my grievance?”

Shahnaz Akmali added, “Do the authorities think anything will change by replacing Mostafa’s tombstone?  They are mistaken. By doing so, they will amplify Mostafa’s outcry for justice; our uproar.  I am Mostafa’s voice and [I] ask you to tell them that Mostafa’s mother asks, “Why?????????!!!!!” Write my inquiry with big question and exclamation marks for the people to see.  Carry my voice louder and clearer so that the people will do something to deliver justice to us.”

While crying, Ms. Akmali continued, “My tears are not a sign of weakness.  These are the tears of a mother mourning for her child.  None of the families are feeble and their cries are not a sign of frailty and weakness.  I am proud that my son gave his blood to replenish the tree of freedom that will someday flourish. Mostafa’s martyrdom has awakened many.  We buried him in a small village in Shahriar, a place where people did not know what was going on, but the incident has enlightened them.  It was continually said that someone killed on Ashura was brought in for a secret night burial. People wondered why a Muslim had to be buried at night.  Mostafa awakened people with his corpse.  The authorities fear this and his tombstone.”

Mostafa Karim Beigi’s mother was arrested on December 5, 2010 while attending Behesht Zahra cemetary for the birthday observance of Amir Arshad Tajmir, another victim of the Ashura protests. She and her daughter were interrogated for hours.  Ms. Akmali said, “If a prickle hurts their child, how would they feel? Does the [regime] understand how a mother like me is feeling?  My child sought freedom; he was a mere protester. He did not belong to any groups or organizations.  He gave his life for freedom.  We wish peace for my son, my daughter, and our family.”

Ms. Akmali previously told Rooz Online that while she was interrogated on December 5, 2010, the authorities said, “Fear for your daughter’s life if you love her.”  [Regime agents] [also] phoned the family home and threatened them.

Ms. Akmali asked in her interview with Rooz, “Where are the international organizations that defend human rights?  What are they doing?  So many children have been martyred. What have the organizations done for them? What happened to the blood of all the children who lost their lives?  Do you know how many families have lost their children?  Someone like me and the mother of Sohrab [Aarabi] raise our voices, but do you know how many families keep silent?  I am ready for anything, and it does not matter whether they arrest me. I am confident that they are listening in on our telephone conversations.  They know where I go. I say all this so they can hear a mother’s heartache. I have not said [anything profound].  I am a mother with a broken heart.  I say this so they hear. Just like how a mother is able to sympathize with me, perhaps [the regime agents] will pity me and question what they would do if their child had died. I asked the interrogator during my questioning [period] whether he was a father and how authorities would feel if a prickle hurts [their] child’s hands; [only then may the authorities] understand how I felt when my child left the house on Ashura and did not return.  He did not come back the next day either or the next, until sixteen days later when I saw him in the Kahrizak morgue…”

Mostafa Karim Beigi’s mother continued, “Please carry my voice to everyone.  Ask the defenders of human rights what they are doing for mothers and fathers who [lose] their children.  What have they done for orphaned children and those who [lose] their spouses? All those who died have parents or spouses and children…”

At the end, Ms. Akmali added, “You cannot imagine the outcry buried in my chest.  Rest assured that it won’t be silenced.  It is Mostafa’s outcry.”

UN Officials and Heads of Government

Foreign Ministries and the US State Department

PrevPreviousWho came in the glass Ferrari, and who pays the bill?
NextThe Good DaughterNext