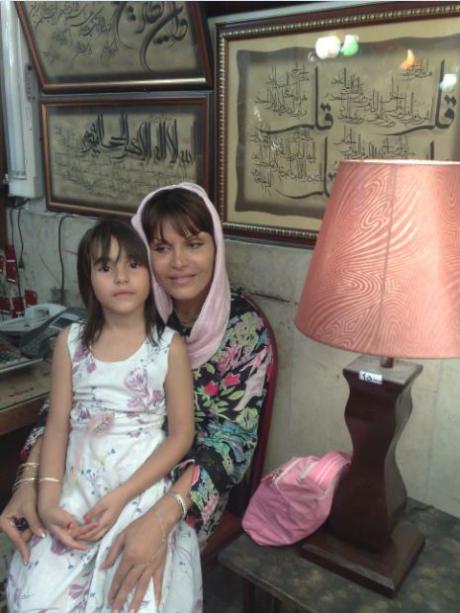 Zahra Bahrami is a woman arrested in the wake of the 2009 Ashura protests (December 27, 2009), but was sentenced to death on drug charges. Her daughter, Banafsheh Nayebpour has objected to the attempts made [by Iranian regime authorities] to depoliticize the case and to present it as dealing with a common offence. She said, “The death sentence issued to my mother is completely political and I implore people, the media, and all human rights activists to not believe the fabricated and trumped-up charge of ‘possession of narcotics’ [levelled against my mother]. The accusation is meant to distract and deceive people to believe the reason behind the death sentence is ‘possession of drugs’ so they refrain from supporting and helping us.”

Zahra Bahrami is an Iranian-Dutch citizen who, according to her family, was violently arrested on Shademan Street in Tehran two days after the Ashura protests. She was later sentenced to death by the Revolutionary Court on the charge of ‘possession of narcotics’, and all her belongings were confiscated.

An Interview with Banafsheh Nayebpour:

Jaras- Ms. Nayebpour, the news of your mother’s death sentence has received extended media coverage. Can you please tell us why, since December 2009 when your mother was arrested, you did not talk to the media about the case until now?

Banafshey Nayebpour (BN)- Initially, after my mother’s arrest, there was no information available on her whereabouts. I even thought that my mother had left Iran. I was really worried. I wanted to know where my mother was and why she was not contacting us. Three months after [her disappearance], my mother contacted us from prison.

Jaras- After you found out that your mother was arrested, did you still opt for silence? I would like to know whether there was a specific reason behind the family’s silence?

BN- Yes, I was threatened into silence. After we found out, I tried to contact the Dutch government through the Netherlands’s embassy [in Tehran], the Dutch media, and my mother’s lawyer in the Netherlands. However, [agents from Iran’s] Ministry of Intelligence threatened me a few times and made me [promise] to not give any interviews to the Dutch media and to not have any contacts with the Dutch embassy and government under any circumstances. I wrote and signed a written promise to not talk about it. The [agents] told me I could be arrested if I gave interviews. A week after the last time I was threatened, I received a phone call from the Prosecutor’s office. Abbas Jafari Dolatabadi [the Tehran Prosecutor] along with his secretary took me to Evin prison. He said to me in front of my mother, “If you do not give any interviews, I promise to do my best to secure the release of your mother.” I, in turn, promised to not give any interviews. But, not only was my mother not released, but she received the death sentence as well.

Jaras- Did you bring this matter up with the Prosecutor at a later date?

BN- Actually, then, Mr. Dolatabadi told me that if I needed any help regarding the case, I could come to the Prosecutor’s office and ask to see him and enter directly. However, after the meeting when he asked to see me, every time I went, he did not see me and nobody answered my inquiries either. Then, they issued a death sentence for my mother. It was after the [issuing of the sentence] that I decided to give interviews, because they did not keep their promise. The Prosecutor had even promised my mother that if she confessed, she would be released. My mother replied, “Alright, just to save myself from these conditions, I will say whatever you want and I will confess.” Now, my mom really regrets [her decision to confess].

Jaras- Did your mother also give televised self-incriminating confessions?

BN- It was the beginning of her detention, around nine months ago, when Channel 6 [of Iran state TV] aired a program that showed my mother making self-incriminating confessions. I was extremely upset. I even told Mr. Dolatabadi that [the false charges] attributed to my mother are shameful. My mother is an artist and she studied music in the Netherlands for a few years. My mother’s confessions completely demonstrated that she was under duress and torture. She was told that if she gave [a televised] interview, she would be released. Even Mr. Dolatabadi told me, “Yes, I did tell your mother that she would be released if she gave a televised interview, however, later on, certain circumstances arose that prevented us from releasing her.”

Jaras- You mean you had a meeting with Mr. Dolatabadi and he mentioned this point himself?

BN- Yes, I talked to the Prosecutor and he questioned why I do not trust him. I responded, “Mr. Dolatabadi, why should I trust you? You promised my mother that you would release her if she made self-incriminating televised confessions; however, months have passed [since my mom’s interview] and you have not released her.” He replied, “She was supposed to be released, but then some problems arose that prevented us from releasing her.”

Jaras- What is your assessment of the fact that the drug charges in your mother’s case were processed, but there has been no mention of the other charges?

BN- It is interesting that my mother was just transferred to the general ward of Evin prison a few months ago. Initially, she was held in ward 209 [controlled by the Ministry of Intelligence]. This demonstrates that my mother’s case is completely political. If the drug charge is much more serious than the other charges, then why was she held in ward 209 in the first months of her detention?

My mother’s case is completely political. My mother was basically arrested on a political charge. They levelled so many accusations of a political nature against her like “acting against national security”, “propaganda against the regime”, “ties to [the proscribed opposition group] the Monarchist Association”, and “Moharebeh [Enmity with God]“. They brought up the fabricated drug charge to distract and deviate the public [to think that her] case is not political.

Jaras- How was your mother arrested?

BN- My mother took part in the Ashura demonstrations [on December 27, 2009], but she had no ties to any association or group. My mother was arrested two days later on the street. She was with her friends [in a car] when a Ministry of Intelligence vehicle ordered them to stop [driving]. My mother explained that they pulled her hair, dragged her out of the car, and arrested her. All the people who were with her were released within the first month. Then, they accused my mother of forming an opposition group. Another accusation they levelled against my mother was ‘membership in the Monarchist Association’. However, the Monarchist Association has issued a statement that Ms. Zahra Bahrami had no ties with the association. Honestly, my mother had no ties to them. [Regime authorities] accused my mother of serious political offences like ‘forming an opposition group’ and ‘Moharebeh’; the latter [could] carry a death sentence. Despite this, suddenly the drug charges surfaced as the reason behind the death penalty. [This was done to] keep everyone’s hands off the case.

Jaras- What actions did your mother’s lawyer take for her defense?

BN- Ms. [Nasrin] Sotoudeh was a very good lawyer for my mother, but she was unfortunately arrested. She defended my mother bravely and was the only person who gave an interview to a Dutch newspaper and said that the charges related to ‘possession of narcotics’ are trumped-up and fabricated. I think because she spread the news and defended her clients it landed her in trouble (I.e. imprisonment].

Jaras- Are you pursuing the case through another lawyer at the moment?

BN- Yes, however, I was hoping to hire an experienced lawyer so that (s)he could offer an effective defense for my mother and save her life. I talked to one of the good lawyers, but we were unable to afford the fees he wanted to charge. I am alone here and I do not have the financial means to pay for the legal expenses.

Jaras- Did you seek assistance to raise this amount?

BN- First, I went to visit the Prosecutor, because [regime agents] confiscated all my mother’s property including her car and home. I told the Prosecutor’s Office to at least provide us with a certain amount of money from the confiscated properties so that we could hire a good lawyer capable of defending my mother. [Upon their rejection to our request], we contacted the Dutch government.

Jaras- Did the government of the Netherlands offer you any assistance in this matter?

BN- Initially, the Dutch government did not accept to help us because they probably did not think that my mother would be issued a death sentence. When the death sentence was issued, they decided to help, but they have not provided any assistance yet. Our situation is very complex. I am alone here. I do not even know if my voice is being heard by anybody who is in a position do something to save my mother.

Jaras- May I ask about the other family members?

BN- My 22 year old brother cannot do anything. I am married. My father and husband could probably help me emotionally, but all our hope was relying on my mother’s properties that were confiscated. So, we are not even able to hire a good lawyer to save her life.

Jaras- Do you have anything else to tell people and the authorities?

BN- To be honest, when I think about it, people took part in the protests for Mousavi and Karroubi, but did Mousavi and Karroubi offer any assistance to the people? My mother had no affiliation with any political party or group. I hope [regime authorities] do not keep the people’s hands off the case because of the fabricated drug charge. Our entire family is shocked [by the drug charges], and they cannot believe how a person who did not even smoke can be sentenced to death for the possession of narcotics.

Most importantly, last week, the Ambassador of Holland said that Iran’s Ambassador in the Netherlands told him that the charge against my mother is ‘possession of one kilogram of cocaine’. However, in my mother’s case file it says ‘about half a kilogram of narcotics’. By giving such contradictory accounts, [the regime] is demonstrating that my mother’s case is political. They are trying to ensure that we are left alone so no one would be able to help us. I wish human rights organizations and the people hear our voice.