In support of Valentine’s Day rally in Iran! 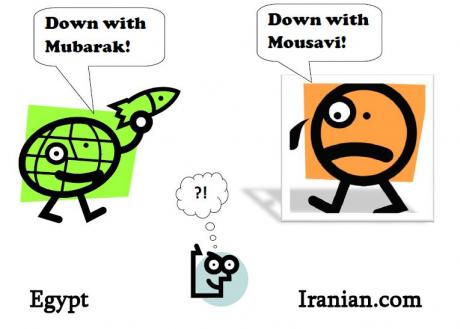 Of course there are other opposition leaders but none have been able to rally support inside Iran.  Couple years ago when people came to the streets and protested first the sham elections and then the repression inside Iran folks on i.com and elsewhere were besides themselves!  Although, many didn’t even acknowledge Mousavi and Karoubi’s role in all of that or try to minimize it and blame them for having alternative motives.

I’ve recently written some blogs and comments about Reformists so I’m not going to bother anyone with it anymore.  So when you think of Khamenei on one hand who shamelessly threatened people in his famous Friday’s prayer speech and carried on his brutal crackdown of protestors and Mousavi and Karoubi on the other hand who have no position in the regime and are under virtual house arrest and subject to random violence by regime’s thugs which should go down first?!

What’s wrong with this picture on i.com where we can’t seem to follow what Iranians are saying inside Iran?  I suppose nothing. I suppose we can always “react” but hardly support it even on Valentine’s Day which many on i.com consider the “holiest day” on the calendar!