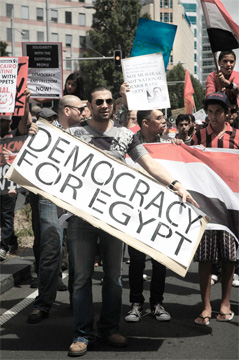 The 1979 Iranian Revolution was supposed to be such revolution, which was hijacked by the most organized, radical and ruthless Islamist who at the time appeared to be benign and on the side of the people. Their success in coming to power brought awe and admiration to all oppressed people in the world and rang a bell of hope that brought deafness the ears of those who stood too close in guard. It soon became apparent that the Iranian people were taken for a ride into a prison of their own making.

All aspirations of democratic freedom of individuals, of the press, of equality for women, Intellectualism, and other fruits of freedom were dashed in a matter of few years. Now Iran is ruled by an uneducated religious few, under the boots of Islamic military, IRGC, and club-wielding thugs called the Basij.

The people in the Islamic World watch with great interest to see where the Islamic Republic of Iran was headed. They saw how this government alienated all other Iranians in the political process, closed down all opposition newspapers, routed out all people in government service that were not affiliated with their clan, imprisoned, and executed anyone that were perceived to be a threat, persecuted Bahais, Jews and Christians and made a fool of themselves in the world community with stupid statements and uncoordinated dealings with international problems.

The Islamic Republic leadership has been worriedly watching the Egyptian revolt for its lack of religious or Islamic fervor. The Muslim Brotherhood’s lack of up front presence in all the demonstrations has dampened the hope for the rise of another Islamic Empire that could join Islamic Republic of Iran in its quest of world dominance of the Islamic world. They attribute this to lack of leadership and express that Ayatollah Khamenei should be the inspiring leader of the religious revolution.

The IRI hardliners like to receive credit that the Tunisia and Egypt revolts were modeled after Iran’s Islamic Revolution.  Ayatollah Khamenei referred to it, continuation of 1979 Revolution of Iran, as a result of humiliation brought by their leaders being lackey of the U.S. and Israel.  The Muslim Brotherhood responded immediately by saying “Egypt revolution is a people’s revolution with no Islamic agenda.” Khaled Hamza, chief editor of the Brotherhood’s English Website said, “The Egyptian protests are not an Islamic uprising, but a mass protest against an unjust, autocratic regime that includes Egyptians from all walks of life and all religions and sects.”

The Muslim Brotherhood is somewhat of an enigma to many of us outside Egypt. According to a statement by a member of the group’s Guidance Council, Essam El-Errian, the Brotherhood is committed to liberation and democracy, application of a gradual reform and nonviolence. The banned organization was exonerated by an administrative court in 1992. They recently participated in talks with Vice President Omar Suleiman. They have no agenda of their own, but that of the people, inclusive of all and not just the Brotherhood or  Muslims.

“In Egypt religion continues to be part of our culture and heritage. Moving forward, we envision the establishment of a democratic, civil state that draws on universal measures of freedom and justice, which are central Islamic values. We embrace democracy not as a foreign concept that must be reconciled with tradition, but as a set of principles and objectives that are inherently compatible with and reinforce Islamic tenets,”  El-Errian wrote.

It is obvious that the Brotherhood has been part of political system of Egypt and will have a roll in the future of a new or reformed government. From the latter part of the above statement, it seems they have the ambition of making democratic principles “inherently compatible” with “Islamic tenets”.

From this author’s point of view the Islamic justice of “an eye for an eye and a tooth for a tooth” is absolutely incompatible with democratic justice that “you are not guilty until proven guilty by a jury of your pears”. And that is the root of the problem in Islamic Republic of Iran, where they do not respect individual rights when exercising  sharia laws. There are arbitrary arrests, courts behind closed doors, trials without defense lawyers and executions without due process.

The leaders of the Islamic Republic see the Egyptian revolt more in light of the 2009 post-election in Iran. The Egyptian military appears to have behaved as protector of the people, while in Iran Islamic goons arrested, beat, shot, and killed protesters and raped detainees without any reservation. They can see a smoldering fire that could be ignited at any time.

In reality leaders in Iran fear that the Egyptian uprising might bring a democratic revolution against the Islamic Republic and not other way around. That is why they are anxiously hoping to see some element of religion in the front rows of the Egyptian revolution.

The 1979 Islamic Revolution turned out to be an unfulfilled promise of freedom and democracy that Iranians have longed for since the 1906 Constitutional Convention. One tyrant after another smashed these dream for their own gain.  It is my hope that the Egyptians do not fall under the rule of hovering vultures, waiting for the death of democracy so they can clean the carcass, as they did in Iran.