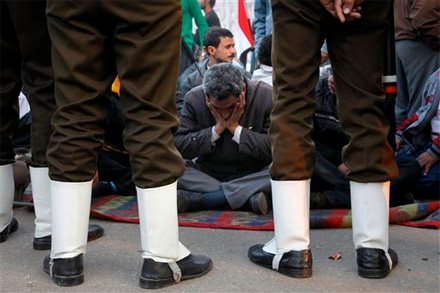 Millions of people in Egypt and all over the Middle East erupted in joy as Omar Suleiman announced on Friday that Hosni Mubarak had resigned.

The Egyptian military decided to oust a widely-resented dictator as it witnessed the growing threat of a potential revolution being born in Egyptian streets.  Had it been allowed to continue for a few more days, the uprising could have grown into a full-fledged revolution which potentially could smash the Egyptian state.  To save the state, the military took charge and overthrew the stubborn dictator.  The dictator was thrown overboard in order to save the dictatorship.

But how can one explain the jubilation of Egyptian people if what took place in Egypt was in essence a military coup d’état?  One straightforward answer seems to be that the majority of Egyptians think of the army as a national institution and a force for good.  Perhaps they still see it as the army of Gamal Abdel Nasser. However, there is another possible explanation for equating a military coup with a revolution: Egyptians had lowered their expectation of what a genuine revolution could achieve to the mere act of ousting Mubarak.

This in turn could be explained by thirty years of brutal rule that had destroyed organizational structures of opposition groups, jailing and eliminating potential leaders.  The eighteen-day uprising in Egypt suffered from the absence of a strong and charismatic leadership.  It also failed to produce one in the course of the events.  The uprising also lacked broad and effective organizational forms.

By all indications, what took place seems to be a spontaneous uprising of those who felt they could not accept the injustice and oppression of the regime any longer.  The uprising in Tunisia provided the spark.  And disillusioned urban youth took the flame and rapidly spread it to most other segments of Egyptian society. Thirty years of pent-up anger began to erupt.  It was all over the streets for the whole world to see.

The elation of Egyptians will go on for a while as they continue to celebrate their victory.  In the meantime, the Egyptian army and its strategic partners (Egypt’s economic elites, the U.S., and Israel) will take a sigh of relief and congratulate themselves for successfully managing the “crisis.”  A cursory examination of the reaction of the Western media makes it abundantly clear that the Western powers and Israel feel that they have weathered the first wave of what could potentially be a devastating Tsunami.  Their leaders even allow themselves to put on a celebratory act, sharing their joy with the Egyptians over their “historic revolution” in which the apparatus of dictatorship was spared and the “transfer of power” took place in a “peaceful” manner.

In his speech on Friday, President Obama tried to cajole Egyptians by implying that the U.S. had always wanted a “genuine democracy” in Egypt and he was glad that Egyptians are finally getting it.  He threw his full support behind the military coup by praising the “moral force of non-violence” in transferring political power in Egypt. Moreover, using the metaphor of the fall of the Berlin Wall, he gave the uprising a wild spin by attempting to establish a parallel between the Egyptian uprising and the colorful “revolutions” in Eastern Europe that produced pro-U.S. and pro-capitalist regimes.  Actually, a better parallel here would be the European revolutions of 1848, which had displayed democratic and egalitarian aspirations.

Now what?  What will happen next depends on two things.  The first has to do with the way the Egyptian army and its strategic partners will conduct themselves in trying to harness the unleashed democratic energy of the Egyptian masses — especially the revolutionary fervor of the youth who seem to be radicalizing rapidly. The second is the manner in which the revolutionary youth and Islamist-nationalist forces will react to the military’s efforts to disperse the crowds and re-establish the state of business as usual.

The ideal scenario for the army and its allies would be to quickly return things to “normal,” make some cosmetic changes in the structure of power, lift parts of the state of emergency laws, and plan elections within a year or so in which the “moderates” will end up being the winners.  If all goes well, the economic power will continue to remain in the hands of Egypt’s transnational elites, and the army will continue to monitor political power from behind the scene.  If the plan works, the U.S. will continue to fund the regime and exert influence over it, and Israel will return to the state of feeling safe again.  For this scenario to work, it is essential that the Egyptian people act compliantly.  Based on what we have seen on Egyptian streets in recent days, one can say with certainty that the people will resist the army.  This scenario seems to be nothing more than a pipe dream.

The actual scenario could be one of the following three.

First scenario.  In returning things to normal, and preparing for the promised reforms and elections, the army will act in accordance with its own interests.  It will strive to protect its political power and its entrenched economic interests that are interlocked with those of Egypt’s super-rich.  The army will thus act in accordance with what it essentially is: an organization whose top echelons of leadership are corrupted by Egyptian transnational elites and by dollars that comes from the American military-industrial complex and Washington.

Given the nature of the army, it seems highly unlikely that the Egyptians will get the democratic reforms they have been promised. Nor will they get fair and free elections, simply because the army, economic elites, and their American and Israeli partners fear that “radical elements” would sweep free and fair elections.  To prevent this nightmare from coming true, American political strategists will share their expertise with the Egyptian political class, army, and security forces.  They will all endeavor to design and conduct upcoming elections in ways that they will both appear free and fair and produce “moderate” winners.  Care will be taken to make sure that the plan is executed with just the right amount of repression and without much bloodshed.

But will it work?  Egypt’s economic problems are vast and structural. Crony capitalism and corruption are deeply entrenched in the economy.  Contrary to what the Western media have gotten us to believe, the main grievance of the overwhelming majority of Egyptians is not the political dictatorship or the violation of human rights, but primarily the tyranny of economic injustice and poverty. To this, one should also add the sympathy of the largest segments of the Egyptian population with the cause of Palestinians and their anger at the Egyptian government for its cozy and puppet-like relations with the U.S. and Israel.  In fair and free elections, candidates running on agendas of Egypt’s transnational elites and their U.S. and Israeli allies will lose to those who will promise economic justice and political independence, and will advocate Arab nationalism, Islamic identity, and pro-Palestinian sentiments.

In this scenario, the Egyptian people will resist the army and whatever civilian form of provisional government that it might try to put together during the period of “transition.”  If pushed too aggressively, this scenario could spark a second uprising, which could lead either to a brutal dictatorship (perhaps more brutal than Mubarak’s) or to a genuine revolution that could possibly overthrow the system.  And if this materializes, there is a good chance that the revolution could follow in a path similar to the 1979 Iranian Revolution, which would eventually take Egypt out of the American-Israeli bloc in the Middle East.  Probably the first response of Israel to such a development would be to ambush Egypt’s army in order to destroy its air force and re-occupy the Sinai Peninsula (1967 all over again).  The U.S. might also join Israel in the attack on Egypt.

Now the second scenario.  A new script will come from Washington, which will include a new strategy of divide and conquer that the State Department and the American “democracy industry” have developed from lessons they have learned in Eastern Europe and Iraq and also in their dealings with the Palestinian Authority.  Money will be distributed among certain elements of the opposition in the guise of supporting democracy.  This will include the usual tricks in the business: offering to train democracy activists, providing campaign expertise, campaign strategies, and leadership workshops to various political groups and parties, etc.  These “well-intentioned” services will be supplied by organizations such as the National Endowment for Democracy and Freedom House, which are well-known names in the democracy industry and have proven track records in helping produce U.S.-friendly “revolutions” and election results.  (There are indications that Freedom House is already at work in Egypt.)

Money will be also distributed covertly (bribes) to various elements in the opposition and in society writ large.  The goal will be to turn opposition candidates into “moderates,” and to create divisions, infighting, and mistrust among opposition groups, and within the Egyptian population in general.  All of that would help corrupt opposition groups and candidates.  This can also be used to call into question the legitimacy of elections if they happen to produce results that would be unacceptable to the U.S.

The money could be brought into the country either under programs with catchy names such as “Egypt Democracy Project” or “Help Egypt Build Democracy,” or disguised as an “economic aid” package intended to help the Egyptian economy recover.  It is also possible that Egypt would get both a “democracy” package and an “economic aid” program.  The aim of the (perhaps substantial) economic package will be to make a quick though temporary impact on the lives of the people.  Its possible forms include direct investments in the economy and small loans to average Egyptians.  The hope would be that the aid would bear fruit within a year or so — in time to improve the image of the U.S. and its Egyptian allies, and help “moderates” win the elections.  The Saudis might be required to foot some or most of the bill.

If this script is followed, it might succeed to some extent for a while. It will not give the U.S. and Israel what they really desire: a stable and reliable strategic puppet in Egypt.  Nonetheless, in their eye, it will still be preferable to a genuine democracy in Egypt that will definitely be a grave danger to the strategic and hegemonic interests of the U.S. in the Middle East.  If the script ends up working, it means that the Egyptian revolution has been aborted. The end result will be an Egypt that will look less like Turkey, which some Egyptians like to imagine, and more like Iraq.

Finally the third scenario.  The army and its partners will implement strategies planned for the first two scenarios simultaneously in order to maximize chances for success.  Repression, democratic trickery, and money will join forces to save Egyptian dictatorship.

Egyptians must be congratulated for overthrowing a brutal puppet-dictator.  What they have accomplished is truly monumental.  Yet, it is not enough.  The real challenge lies ahead.  They need to be vigilant as they will be tested soon.  Their revolution has just begun. They will have to choose between playing the game that the U.S. and Israel have in mind for them, on the one hand, and smashing the machinery of Egyptian dictatorship and replacing it by a genuinely democratic system, on the other hand.

They will need to choose between an aborted revolution, on the one hand, and a democratic revolution that would let them keep their restored dignity and bring them political empowerment, economic equality, and social development, on the other hand.  As Egyptians are looking at their choices at this historic juncture, the U.S. and Israel are facing their biggest challenge in the region in recent decades.  The whole Middle East could blow up in their faces as America’s puppet-dictators — the so-called “moderates” — are bracing for revolts and possibly revolutions.