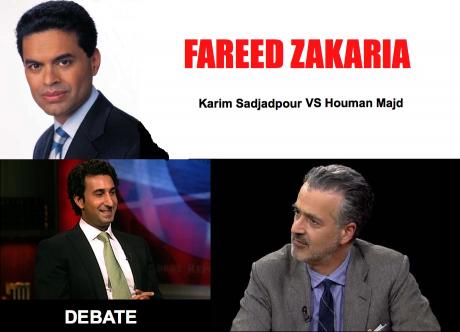 Karim Sadjadpour is an associate at the Carnegie Endowment. He joined Carnegie after four years as the chief Iran analyst at the International Crisis Group based in Washington and Tehran, where he conducted dozens of interviews with senior Iranian officials,and hundreds with Iranian intellectuals, clerics, dissidents, para militaries,businessmen, students, activists, and youth, among others.

He is a regular contributor toBBC TV and radio, CNN, National Public Radio, PBS News Hour, andAl-Jazeera, and has appeared on the Today Show, Charlie Rose, FoxNews Sunday, and the Colbert Report, among others. He contributes regularly to publications such as the Economist, Washington Post,New York Times, International Herald Tribune, and ForeignPolicy.

Frequently called upon tobrief U.S., EU, and Asian officials about Middle Eastern affairs, he regularly testifies before Congress, has lectured at Harvard, Princeton, and Stanford Universities, and has been the recipient of numerous academic awards, includinga Fulbright scholarship.

In 2007 Sadjadpour was named a Young Global Leader by the World Economic Forum in Davos. He is a board member of the Banu Foundation, an organization dedicated to assisting grassroots organizations that are empowering women worldwide.

Hooman Majd is a writer based in New York. He has written for GQ, the New York Times,The New Yorker, the New York Observer, Salon and is a contributing editor at Interview.

He often writes on Iranian affairs, and travels regularly to Iran. He has also served as an advisor and translator for two Iranian presidents, Mohammad Khatami and Mahmoud Ahmadinejad, on their trips to the United States and the United Nations, and has written about those experiences.

Hooman Majd has also had a long career as an executive in the music and film businesses. He was Executive VP of Island Records, where he worked with adiverse group of artists including U2, The Cranberries, Tricky and Melissa Etheridge; and Head of Film and Music at Palm Pictures, where he executive-produced James Toback’s “Black and White” and Khyentse Norbu’s “The Cup” (Cannes 1999).

Majd has had his short fiction published by Serpent’s Tail (London) and Bald Ego (New York). His non-fiction book on Iran, “The Ayatollah Begs ToDiffer”, was published by Doubleday in the Fall of 2008.

Hooman Majd was born in 1957 in Tehran, Iran, and was educated in England and theUnited States.