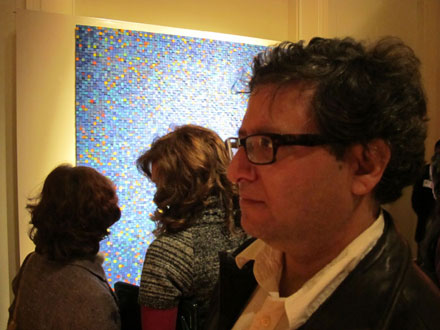 My sister and I were anticipating the opening of Carlos’ show for weeks.  Carlos Estrada-Vega is an artist, a native of Chihuahua, here in northern Mexico, but better known in the U.S., Europe and Australia. In fact this was his first show in all of Mexico and his hometown got the honors to be the host. They must be very proud of him here, and more so after the opening of his stunning exhibition last week. His art comes down to simple cubes with one simple colors side by side. That’s when it gets complicated because each square is not exactly the same as the next, in size or shade. It’s a subtle dance between being the same and different at the same time. Like humanity and its mother Africa >>> Photo Essay

Carlos Estrada-Vega on the opening of his art show, “Africa”, at Casa Chihuahua, Mexico: “I am amazed by the hospitality of Chihuahua, my childhood and my newer friends and my family. Africa is a show I have worked on for the last 12 months. The focus is Africa the craddle of humanity, not a graphic representation but a visual representation of a year I have dedicated to think about the walk of humanity throughout the Earth. We have evidence that the land of Africa is the Mother of Humanity and these eight compositions comprised of close to 30,000 components is an ode to the beauty of the land that saw us emerge and mold for a couple of million years before she finished forming us into what we are today. I feel that humanity is on the brink of a major transformation; we are about to became the spiritual beings that we are meant to be. That is why I wanted to celebrate Africa as our Mother.”