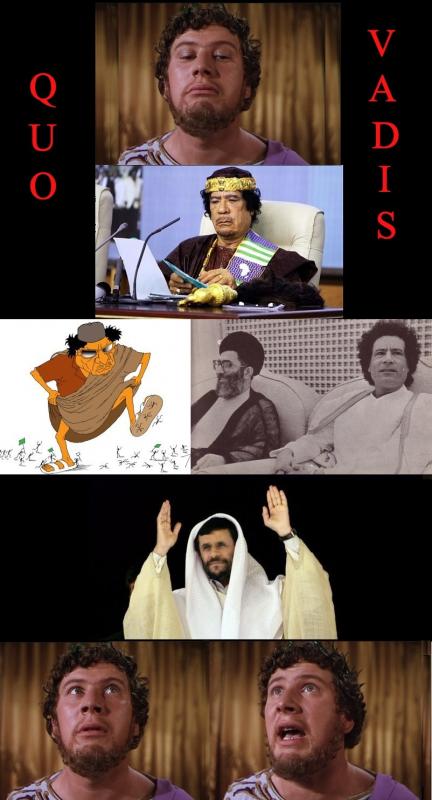 The hallucinating images from Libya showing a delusional Colonel Gaddafi denying the slightest upheaval in his country, and Iran’s President Ahmadinejad reciting poetry amidst crackdowns in Iran would probably make Nero Blush in shame.

Gaddafi tells ABC’s Christian Amanpour that All his People Love him, No revolts in Libya,  blames unrest on Al Quaeda:

‘Gaddafi will fight on, 1000 dead in Libya just a beginning’:

Gaddafi Speech: I will fight till death & die a martyr:

Quo vadis? is a Latin phrase meaning “Where are you going?” or “Whither goest thou?”. The modern usage of the phrase refers to Christian tradition, related in the apocryphal Acts of Peter (VercelliActs XXXV), in which Saint Peter meets Jesus as Peter is fleeing from likely crucifixion in Rome. Peter asks Jesus the question” Quo Vadis?”; To which Jesus’ answer is, “I am going to Rome to be crucified again” (Eo Romam iterum crucifigi), prompts Peter to gain the courage to continue his ministry and eventually become a martyr.

The phrase also occurs a few times in the Vulgate translation of the Bible, notably including the occurrence in John 13:36 in which Peter also asks the question of Jesus, after the latter announces heis going to where his followers cannot come.

SATIRE: The Extraordinary Tale of The Persistent Fly ;0)