MAZEH PARIS: With Ali Tavassoli on Manoto TV’s “Welcome To My Life” 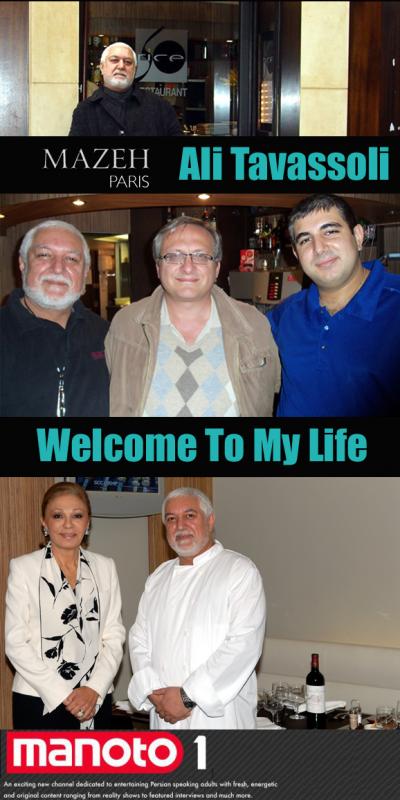 I had the chance to meet Persian Cook Ali Tavassoli on the set of  an Episode of Manoto TV’s “Beh Zendeghyeh Man Khosh Amadeed” aka “Welcome to My Life” which I helped produce.

With exclusive insights into his life (both personal and professional), Ali Tavassoli proved to be a wonderful and generous host beyond our expectations.

I hope you will enjoy this documentary.

Welcome to My Life: Ali Tavassoli

If a dialogue of civilizations is so essential in our times and particularly between Persia/Iran and the West it would certainly find an ambassador in the person of Iranian Cook Ali Tavassoli. The Paris based but Shirazi born Persian Chef and Caterer who in the words of the Great French Chef Jean-Pierre Coffe “has introduced one of the unique and exquisite culinary experiences of my lifetime.”

A lover of the Arts and former student of the Beaux Arts, Shirazi Cook Ali Tavassoli has been drawing French and Persian Celebrities to his table ever since his participation to a popular TV show Vivement Dimanche a few years ago on the invitation of Iran’s former ruling Empress Shahbanou Farah Pahlavi, who was promoting her autobiography “An Enduring Love: My Life with the Shah A Memoir“. He has also been catering at the Cannes Film Festival where he supervised the dinner offered by Marjane Satrapi to celebrate her victory at Cannes in 2007 ( See ) .

Mazeh and its extension So Rice are two of his Restaurants set in the heart of Paris in the 15 ème arrondissement.  It also has a take away by the same name of Mazeh which is situated at La Rue des Entrepreneurs (See info below).

The man with a dignified white beard that looks like one of the immortal guards sculpted in Persepolis will greet you with a pleasant smile, warmth and simplicity very much appreciated by the French and Persian clients of the eternal city…


For more info tune to:

And look for updates on the New Channels Programs on their Official Website Here.

THE COURT JESTER AND I: With Mansour Bahrami on the Set of Manoto’s “Welcome to My Life”

MANOTO LONDON: Googoosh Music Academy Takes Off on Manoto One