NATION BUILDING OR DEMOCRACY BY OTHER MEANS 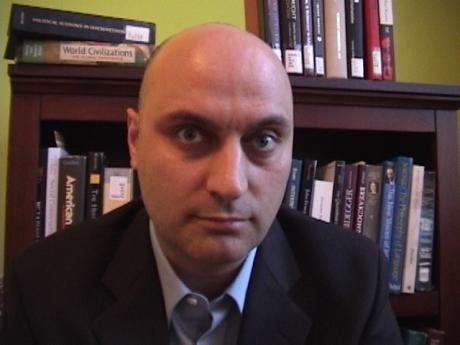 The following is an excerpt from my book Nation Building or Democracy by Other Means, Available on: Amazon.com or Barnes&Noble

It is perfectly natural that Americans would recall and be plagued by the memories of the hostage crisis, while ignoring or not even remembering the US involvement in the coup. Every nation would normally view history from its own perspective. There is nothing unusual about this. For this reason many Americans looked down at the Iranian action as barbaric, whereas they ignore the barbarism involved in the CIA’s coups, assassinations, and kidnappings around the world. For at least five reasons what the US did to Iran in the 1953 coup was much worse than the hostage crisis:

First, the coup was a bloody event, but the hostage-taking was not. The coup plan involved stirring up a riot in favor and against the government, and then sending in the military to crack down on the riot and seize the opportunity to topple Mossadegh. About 300 people died as the military opened fire. This was a direct casualty of the coup plan.The US embassy staff and their families were subjected to incred­ible and unjustifiable anguish, which must not be neglected, but none of them suffered death. The fiasco following the President Carter’s rescue plan, where a US helicopter crashed in the Iranian desert killing three members of its crew, was not part of the hostage-taking plan; it was part of Carter’s rescue mission. While the death tolls on both sides are, of course deeply disturbing and regrettable, it is important also not to forget that the coup’s casualty were about hundred times greater than the casualty following Carter’s rescue mission. If bloodshed is an important factor in assessing the severity of two regrettable events, the coup was worse by far than the hos­tage crisis both in principle and in degree.

Second, the hostage-taking violated the human rights of the American embassy personnel, whereas the coup violated both the human rights of its victims and the principle of the sovereignty of free states. The coup was an act of intervention in the internal affairs of a country which had neither threatened the US nor ever had the power to do so. Kermit Roosevelt attempted first to convince the Shah to dismiss Mossadegh, but the Shah did not have stomach for such action, knowing how popular Mossadegh was. When that plan failed, Roosevelt embarked on his plan B, which was the coup.

Third, the hostage crisis did not alter the American political sys­tem. Carter lost the election, but the political system in the US re­mained intact. The coup was, on the other hand, a major setback for democracy in Iran, as it put the Shah firmly in power for 26 years. The Iranian Revolution in 1979 promised freedom and prosperity, but it turned out worse by far than the Shah’s regime. If we were to ask whether the 1953 coup or the 1979 revolution was more detri­mental to Iran, the answer is clearly, as has been implied above, the revolution. But in comparing the effect of the coup on the political system in Iran to the effect of the hostage crisis on the political sys­tem in the US, the coup was the greater offence. The hostage crisis left Americans with a baggage of strong anti-Iranian emotions, but the coup profoundly altered the Iranian way of life.The fact that Khomeini was a worse dictator than the US-backed Shah does not mean that putting the Shah in charge as an absolute despot was the right thing to do. A nation’s self-harm does not war­rant other nations to harm it.

Fourth, the coup was initiated in Washington. It is always much worse when leaders at the very top concoct aggressive and harm­ful plans than if a group of agitators commit a wrongdoing. The hostage-taking was initiated by a group of radical students, even though Khomeini as the head of the state threw his lot behind it in the end. Khomeini hesitated briefly with his support, but soon decided that he would be on the side of the students and from that moment on the Islamic Republic took ownership of the hostage cri­sis. By contrast President Eisenhower, who issued the go-ahead for the coup, led a well-established government with a long democratic tradition, but Khomeini’s Islamic Republic was still in the experi­mental stages at the time the hostages were taken. Usually, more is expected of governments that are based on solid foundations than a government which is dealing with post-revolutionary chaos. Fifth, the coup came first, the hostage crisis second. It is usually the case that the party which delivers a first blow, without proper reason or justification, is more in the wrong or guiltier than the one which hits back in response. The US had left a track record of con­spiring policies that suppressed the people of Iran. From the Iranian perspective it was plausible that a second conspiracy could be in the making, and the American Embassy would be a natural base for it. The young and fragile revolutionary government of Iran in 1980 lacked the resources to protect itself. The hostage-taking was their only deterrence against a US advance. Considering the legacy of the Guantanamo Bay detainees without trial, Americans would be very likely to undertake a similar pattern of behavior under extreme na­tional security threats (perhaps not exactly a hostage taking, but something of similar effect). Taking innocent people as hostages for political purposes was regrettable, but the US had set itself up for a strong Iranian reaction. Furthermore, at the time of the hostage-taking, the Iranian students had no way of determining which of the embassy staff were CIA operatives and which ones only innocent diplomats. They had reason to suspect any of the staff as a potential threat to their national security. It became apparent later that the US embassy had no plan of new coup, but even so, as Kenneth Pol­lack has pointed out, the Carter Administration did indeed send one of its high-ranking generals to Iran to assess the situation and to find out if a coup could possibly be executable just in case. The general had concluded that no such plan could have a chance of succeeding in 1979’s Iran. The suspicions of the students who stormed the em­bassy was heightened when they discovered that the embassy staff had hurriedly destroyed secret documents. The students managed to reconstruct some of the documents by painstakingly taping them back together, but many documents were lost. On the other hand, Iranians as a nation were in comparison guilti­er than Americans in at least one significant respect: Iranian oppor­tunists contributed directly to the execution of the coup, whereas Americans did not participate in the hostage-taking. The royal court was fully informed about the coup plan, but failed to say no. At first, the Shah rejected the plan, but only because he was scared of a back­lash. The royalists and the Iranian military must ultimately bear a great deal of the responsibility for allowing the coup to happen. This fact neither vindicates the US for its involvement in the coup nor al­leviates the impact or severity of the coup, but it does highlight the fact that a group of Iranians were guilty too. American commenta­tors sometimes complain that Iranians neglect the role of their own countrymen in this coup. This is not true. Had Iranians neglected the royalist hand in the coup and in other harmful events, the royal­ists would have been in power today.

The above presented a comparative assessment of the 1953 coup versus the 1979 hostage crisis. Considering both sides of the argu­ment, the conclusion must clearly be that, although both events were highly unfortunate and devastating for both countries, the coup was comparatively speaking a worse action than the hostage crisis both in degree and principle. Judging by the loss of 300 lives alone, the coup must be condemned far above and beyond the hos­tage crisis. It was hypocritical of Eisenhower’s government that it would topple Mossadegh in the name of freedom, only to install the shah in his place and to put foreign companies in charge of the Ira­nian oil. For many Americans it comes as a surprise that America comes out looking the worse in this assessment of history; but it is no surprise that the nation with greatest power can do the greatest harm to the weaker nation. The US provided millions of dollars in financial aid to the Shah after 1953. The Iranian people benefited from this aid, but the bit­ter memory remained intact. Worst still, the millions of dollars of aid money never translated into any meaningful social transforma­tions in the direction of democracy even when human rights organizations and the Carter Administration pressed the shah years later for democratic reforms. The coup had become possible only because Washington had taken the liberty to play big government and ig­nored conditions on the ground in Iran. It failed to permanently keep the shah in power, it failed to usher in democracy, and it failed to protect the US interests in the long run. Change coerced from above—via coup or other forms of militaristic actions—would not create a success story for the US or the Iranian people. Kermit Roos­evelt was hailed in 1953 at CIA headquarters, but had they known what would happen 26 years later, they might have thought twice. Just as the coup succeeded as a plot, but failed to produce the in­tended outcome in the long run, the hostage-taking failed its objec­tives. It succeeded to cut off the American influence in Iran, but if the purpose was to gain full independence from the US in order to strengthen the country’s position in the region, it failed. Interna­tional sanctions weakened Iran. If it was used to leverage the US extradite the shah and free the Iranian assets, none happened. If it was used to humiliate the world’s greatest superpower, Iran itself became the subject of much humiliation and loss of kudos because of that action. But the hostage taking helped Khomeini consolidate his power, just as the coup helped the US consolidate its power in the Middle East. And the immediate costs of these barbaric actions were 300 dead on the Iranian side, and the sufferings of 52 hostages for 444 on the American side—not to mention the crippling sanctions following the hostage crisis and the thousands of individuals who suffered in the shah’s prison under the CIA’s nose after the coup.

To purchase or learn more about Nation Building or Democracy by Other Means visit: Amazon.com or Barnes&Noble