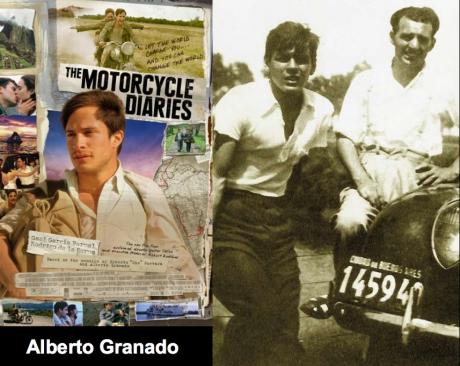 Alberto Granado, the motorcycle companion of Ernesto Che Guevara, has died in Cuba at the age of 88. Walter Salles’ Oscar Winning film Motorcycle Diaries were based on his book.. (See BBC report

The dramatization of a motorcycle road trip Che Guevara went on in his youth that showed him his life’s calling.

The Motorcycle Diaries is an adaptation ofa journal written by Ernesto “Che” Guevara de la Serna when he was 23 years old in the early 1950s. He and his friend, Alberto Granado are typicalcollege students who, seeking fun and adventure before graduation, decide to travel across Argentina, Chile, Peru, Colombia, and Venezuela in order to do their medical residency at a leper colony. Beginning as a buddy/road movie inwhich Ernesto and Alberto are looking for chicks, fun and adventure before they must grow up and have a more serious life. As is said in the film itself, it’s about “two lives running parallel for a while.” The two best friends start off with the same goals and aspirations, but by the time the film isover, it’s clear what each man’s destiny has become.

Alberto Granado, the motorcycle companion of Ernesto Che Guevara, has died in Cuba at the age of 88.

The pair’seight-month journey around Latin America was immortalised in the 2004 film TheMotorcycle Diaries.

The journey,started in 1951, exposed the two medical students to deep poverty and socialinjustice and awoke Guevara’s revolutionary convictions.

After arrivingin Cuba in 1961, Granado taught biochemistry at Havana University.

His body is tobe cremated and according to his wishes, the ashes are to be spread in Cuba,Argentina and Venezuela, Cuban television said.

Granado was bornin Cordoba, Argentina, on 8 August 1922 and met Guevara as a child.

The film oftheir travels around Latin America on the motorcycle they called La Poderosa -The Powerful – was based on diaries both men kept.

Che Guevara waskilled in Bolivia in 1967 as he tried to lead a revolution there.