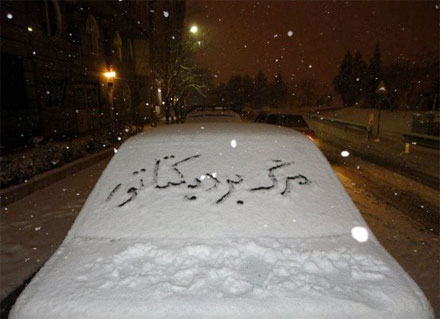 People around the world have been making comparisons between the situations in their countries and those in the Arab lands in revolt. Will Saudi Arabia follow the path of Egypt? Is Azerbaijan like Tunisia?

Such comparisons are often misleading, but we can’t help doing it and sometimes such exercises can produce interesting hypotheses. For instance, looking at the spectrum of the Arab uprisings, I believe that Iran is more like Egypt than like Libya. Maybe.

Anti-government protesters celebrate the announcement of Egyptian President Hosni Mubarak’s resignation.
Egyptians rebelled en masse against the authoritarian and corrupt rule of President Hosni Mubarak. The people wanted to bring an end to a regime that simply did not accept the right of the people to elect and change their government. The uprising came 30 years into Mubarak’s presidency.

Obviously, this has parallels with Iran’s Green Movement, which started in 2009, exactly 30 years after the Islamic Revolution. The masses rose up because they believed their votes had been stolen to allow the regime to continue unchanged. With the supreme leader, the Guardians Council, the Assembly of Experts, the Revolutionary Guards, and the Basij militia, the Iranian regime has developed a well-organized network of suppression to safeguard the survival of the system and to head off any attempt to change it.

Mubarak, of course, justified his authoritarian rule by claiming it ensured stability and prevented Islamists from coming to power and ending the peace with Israel. Iran’s leaders, on the other hand, claim to be ruling in the name of God and the Hidden Imam. Some have recently begun arguing that they don’t need popular support or a mandate. Libya’s Muammar Qaddafi styles himself the leader not only of Libyans, but of the entire Arab world and Africa, and sees no need for elections or a popular mandate.

In both Egypt and Libya, the issue was one person — the leader. The people simply wanted the leader to leave so that the government could be changed and the system reformed. In Iran, although the system is headed by the supreme leader, it does not depend on him. It will not fall apart if that person dies or is removed. It did not collapse when Ayatollah Ruhollah Khomeini died, and it will not collapse if something happens to Supreme Leader Ali Khamenei. The system has reliable mechanisms for replacing the leader and for defending its own choice against dissent.

It is also important to note that Libya is primarily a tribal society and the conflict there has many features of a civil war. In Egypt and Iran, the conflict was between a more or less united nation and a repressive national government. Those two countries have strong national identities and large portions of their societies view themselves primarily as citizens of their country rather than representatives of particular ethnic or religious groups. The Green Movement in Iran has failed so far because, unlike in Egypt, a sufficiently large portion of the population has not yet stood up for change.

Another way in which Iran is more like Egypt than Libya is the lack of violence. Two years ago in Iran and recently in Egypt, people took to the streets peacefully and explicitly rejected violence and weapons. In Iran, leading opposition figures have argued vehemently that their movement can only succeed if it remains steadfastly nonviolent.

One common thread that unites all the Arab uprisings and the Iranian opposition movement is yearning for freedom and an end to corruption. In none of these countries is anyone calling for rule in the name of God or Islam, unlike in Iran 30 years ago. I would cautiously call the coming phase the beginning of post-Islamism. If modern Islamism can be said to have begun with Iran’s 1979 revolution, then perhaps Iran’s failed 2009 uprising will be seen as the precursor of post-Islamism. The Tunisians and Egyptians succeeded where the Iranians failed. But that does not mean that the “new Arab revolutions” will always be limited just to the Arab lands.

AUTHOR
Abbas Djavadi is an associate director of broadcasting at Radio Free Europe/Radio Liberty (RFE/RL). This commentary was first published on .