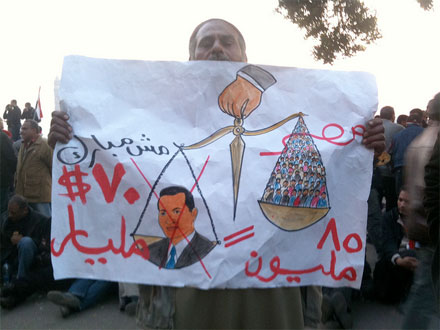 Hosni Mubarak’s government has been serving the U.S.for past thirty years grudgingly, but to serve himself mainly. Grudgingly because he generally opposed the west in international forums, campaigned against Israel, but maintained a cold relation, and often criticized the U.S. for interfering with its internal affairs. In tunes of billions of dollars, he maintained stability that U.S. was after. No wars with Israel, no production of military hardware, and cooperation in handling the Palestinians to the liking of Israel.

Sucking up to Mubarak was based on the flawed notion that without him, the Islamist will take over, ending the Peace Accord with Israel, and unleashing Hamas to cause havoc in the region. Mubarak rode this camel all the way to the bank for billions of dollar until his fall. Now we see no anti-semitism, no religious fervor, Hamas is in check for the most part, and democratic process is moving forward ever so slow, because some deals have to work out.

What did really happen was a spark that ignited the flame of hope in the hearts of those who desire freedom, reduction in poverty, better justice and elimination of indignities perpetrated on them by despotic dictators. (see Jackson Diehl’s )

Egypt’s military has won the hearts of all Egyptian and deservingly enjoys their respect. It is entrusted with making democracy a dream come true, becoming the envy of all who live in the Middle East. In the complexity of transition from dictatorship to democracy, there exists a paradox. The one delegated in paving the way to achieve a goal, is the one who stands in the way inadvertently.

At the heart of the issue is the economy and everything else is relative. Here is a brief run down on Egypt economy. Agriculture provides limited GDP. The North West Nile valley gets about 200 millimeters of rain yearly. The southern part gets hardly any rain. The old aquifers are the source of water, resulting in total of 13% GDP. In the last millennium Industrialization has been responsible for economic improvement. Textile is big industry, as well as production of Cement, Iron, Steel, Chemicals, fertilizers, rubber goods, refined sugar, tobacco, canned food, cottonseed oil, resulting in about 38% of the GDP. Mining is done in crude oil, salt, phosphates, Iron. In the area of energy, the county is self-sufficient with petroleum. Aswan Dam provides most of the electric power. Suez Canal brings in about two billion dollars per year, 5% of the GDP. Other services provide about 49% of the GDP. (These figures may vary depending on source and year).

Regardless of what standard one uses, the conclusion is that Egypt is a poor country. Egypt has always needed someone’s support to remain afloat. Up to 1972 it was Soviet Union supporting the State. By choice, Egypt dropped the Soviets and joined the West. The rich Arab nations became the main sponsors. When it signed the Peace Accord with Israel, the Arabs dropped Egypt, and tab was picked up by the United States as it stands today. The next major problem is the inequality in income distribution in Egyptian society as you will see in the following discussion.

The Camp David Accord of 1978 is considered the hallmark achievement of President Jimmy Carter. It resulted in Egypt-Israel peace treaty in 1979, much to displeasure of other Arab nations. Among other things, it halted Egypt’s military manufacturing with conversion to domestic products, For instance a tank factory converted to washing machine factory. This shifted the military to business ventures that generally belonged to domestic entrepreneurs.

U.S. government provides millions of gallons of drinking mineral water to its soldiers in the Middle East. The water comes from Siwa Oasis, Egypt’s western desert, sold by Company belonging to the military. Military is engaged in businesses of computer, cement, olive oil, and bread. While they are not involved in telecom, oil, and natural gas, they control majority of real estate activity and construction. Their retired officers are generally placed at high executive positions in other industries, therefore have control over all businesses they do not own. All economic activity must go through them in the form of licensing, construction or indirect control. They own and control the land north of Red Sea. The land where Sharm el-sheikh is located was acquired from the military. It is sea front prime real estate, off limits to unauthorized visitors. With its conglomerate, the military constitutes 10 to 40% of Egypt’s GDP on any income producing venture and pays no income taxes.

The military holds a special status that places them above the society at large. They have their own clubs, housing, sports teams and supermarkets. The products bear their own name brand. In effect they live in a world of their own in Egypt. They operate under a dense smoky cloud, impervious to the outside world. They keep a low profile and it is illegal to report on the military.

In 1991 IMF (International Monetary Fund) and the World Bank recommended for Egypt to engage in economic reform and privatization. While this transformation was underway, in 2003 the government passed the Unified Labor Law in which the Unions and workers became the target. They created the Temporary contract workers, whereby they could be dismissed at will; they could not join a union and could not become permanent workers. Plus limits were placed on collective bargaining and right to strike.

Privatization is a two sided sword. When a state-owned factory is transferred to a private investing company, the first thing the management does, is to cut expenses by streamlining the operation for efficiency and productivity. This means elimination of many low level and supervisory jobs. For instance, with the six ESCO Textile mills, they lost 65% of the workforce. Privatization can be very good for a progressive economy, where investments are diverted to modernization of production, providing jobs for the young educated generation and expansion maintains employment. Instead Egypt gave the new industrialist tax and legal concessions. Some factories had the workers sign a resignation letter as condition of employment. They could be released at any time for any reason or Union activity. The final result of this economic reform, the rich and powerful became fatter, while the workforce was driven more into poverty.

Analysis: Egypt has a population of about 70 million verses inadequate productivity of good and services to support itself. And what is there is either owned or controlled by the military and a small group of rich and powerful connected to the top. What is wrong with that? It is the old capitalistic motivation. The businesses they own and control brings in plenty to keep them rich and happy. But there is no innovation and incentive to modernize, expand and bring real growth to the economy which provides jobs for the young and educated, as well as trickle down to lower segments of the society. As the result the military ownership and the fat cats have put on a strangle hold on the economy. For this economy to move to higher stage there must be occurrence of many privatizations the right way, which brings motivation and attracting foreign investment. This in turn provides jobs and expansion of the economy. For this to happen, someone has to convince the military they must loosen their grip on their holdings for the good of the nation. If you said good luck for that, I am inclined to agree. The military holds the cards in negotiations with insiders to form a new democratic government. From their point of view the essentials are keeping what they have, a high level of military budget, and immunity from prosecution for any crimes committed in the past. This is the reason it is going to take time to get it worked out? However, this military does not like the limelight, and the sooner they can unload the monkey off their back the better, diverting attention from themselves. They have secured their fortune; let the civilian government worry about education, employment or lack thereof, maintaining infrastructures, headache of foreign meddling, corruptions and protesters.

So under the prevailing circumstances what kind of democracy are they going to have? My prediction is of a cosmetic one. Elections, new names, new face, freedom of the press, so long as some people and things left alone. Life will be better and even some privatization will occur, with foreign investments. U.S. will remain to be the big sponsor, and peace with Israel continues. The guards will change but the system remains intact. That is called Stability!

This is typical of all dictatorships in Middle East Arab countries and Iran. Those who hold the power, hold the wealth. Their material wealth goes beyond their needs, yet is blinded with greed. Their subjects live in poverty, but they do not see it. It is inconceivable to think there is poverty in Saudi Arabia (see photos), where money rolls in truck loads daily (so to speak). The opulence of Royal family in one hand and the poverty of ordinary families and child labor on the other. As for Iran, description of Egyptian military reminds us of IRGC and their stranglehold on Iranian economy. Here is a quote from article entitled “Going after the Guards”, Iranian.com, July 7, 2010, by this author. “Over the years IRGC expanded its enterprise to other opportunities along the lines of telecommunications, energy, logistics and services, and automobile. They also build dams, bridges, and tunnels underground for railways. Ghorb’s director is IRGC General Rostam Qasemi, and its chief executive is IRGC’s commander and chief, Major General Mohammad Ali Jafari. Ghorb’s military projects extend to the Nuclear and Ballistic missile programs. Smuggling contraband of sorts, electrical appliances and gasoline is another. But maintaining the regime with their brutal repressive measures that the world has witnessed is their specialty. Ghorb was added to the list of 40(sanctioned) including 15 other companies connected to IRGC”.

As one can see IRGC’s hands in controlling Iran’s economy is by far more reaching than that of Egyptian military. But again it establishes how dictatorships control the public wealth, use it to enrich those around them for support. Establish a dedicated military or militia, in case of Iran both, to suppress the population. Control newspapers, radio, television and electronic media. Isolate or imprison high profile opposition. And relentlessly beat, arrest, imprison and kill protesters. Africa/Middle Eastern dictatorships, call it by whatever name, is wrapped in a package of wealth and armed assassins. Their hands soaked with the blood of the innocent poor, and remains standing with the sword, a symbol of force and coercive power, and an instrument of destruction.