Do not fall for any of these April Fools’ Day pranks 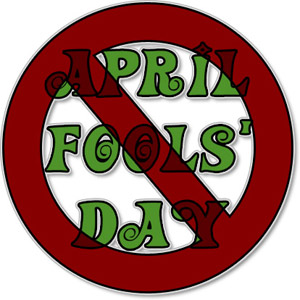 Ali Khamenei is neither dead nor mortally sick.  At this rate, if nothing un-natural happens to him, he’ll probably live for another thirty years.

Hillary Clinton and Barak Obama are not in love with each other and do not have a sexual relationship.  This is such a lame April Fools’ Day prank!  Hillary doesn’t have any time on her hands nowadays.

The USA military services are not secretly working with Al-Qaeda to topple Muammar al-Gaddafi regime in Libya.  Al-Qaeda is too busy elsewhere and does not have any extra manpower to send to join up with the USA in Libya.

Persian Gulf’s name has not been permanently changed to Arabian Gulf by any one of the United Nations’ high commissions.  It is simply hasn’t happened yet.

The news that the United States is going to implement a No-Fly-Zone over the Palestinian territory, preventing Israel air force to fly war planes over the area is totally phony.

The Islamic Republic of Iran is not going to release (insert whatever number you want here) political prisoners for the 13th day of the Persian new year (sizdeh bedar). This type of news is completely fictitious.  As a matter of fact, the IRI is going to increase the number of political prisoners, not decrease them.

Mir Hossein Mousavi has not defected to Pakistan, or any other country.  He can’t even defect to the baghali sar’e koocheh, let alone defect to another country.

Iranian filmmaker Jafar Panahi has not agreed to produce a film favorable to the IRI in exchange for his freedom.  No, no, no,,,

The IRI has not put a moratorium on execution.  Fake, fake, fake,,,

And finally, the news that Ahmadinejad and Ana Postor are not in love with each other is totally bogus.  They are in love and very soon Ahmadinejad is going to defect to Spain, and hopefully he will convince Imam Zaman to make his appearance over there instead.