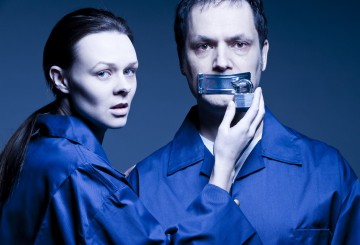 Whether you’re well familiar with the plot or just read it once for English 12, this cleverly orchestrated live version will give you a descriptive glimpse into a perpetually hopeless world that vividly breathes in the 298 pages of Orwell’s classic novel. Well, until now that is.

Staying loyal to Orwell’s colourless, dystopian, political, “not-so-fiction” fiction, all of its cult favourites are included, such as the “Thought Police”, which hover in-between cafeteria tablets to sniff out citizens guilty of anti-government dissent. Not to mention the violently popular “Hate Week”, which aims to rally support for the dogmatic dark-eyed symbolic Party leader, Big Brother and to cultivate hatred in the angry mob against the illusion of an ever advancing enemy to the state.

A highlight of Thompson’s adaptation is Virtual Stage’s flawless incorporation of multimedia into the very flesh of the performance.  Several uncompromisingly invasive screens, crowds of faceless soldiers, and more than 500 cues hold together this crafty crack at depicting Winston’s pale existence under the eternal stare of Big Brother.

Winston, a motherless muted man played by Alex Lazaridis Ferguson is a member of the “INGSOC” (English Socialism) and works at the “Ministry of Truth” where he alters documents to concur with the autocratic and rather ambiguous interests of the Party. In writing 1984, the British novelist, George Orwell (1903-50) was inspired by the nightmarish atrocities committed by fascist regimes such as Adolf Hitler and Joseph Stalin during WWII.

Contemporary examples of the predictions shown in 1984 include the Bush administration’s Patriot Act, which violates the privacy of US citizens in the name of “national security” and Ahmadinedjad’s efforts to blatantly retell history to spur “us-and-them” fury and a hissing hatred of a foreign target. The exploitation of the nationalistic emotions derived from Martyrdom in Orwell’s novel is used to provide fuel to fire a perpetual war which keeps society obedient to the power of the Party and fearful to the fabricated enemy. The erasure of inconvenient facts and the creation of dead heroes in 1984‘s propaganda machine echoes the Iranian regime’s efforts to blur the facts surrounding the deaths of the numerous 2009 pro-democratic protestors in Tehran, such as Neda Agha-Soltan and Sohrab Aarabi. Frankly, if you hold an Iranian passport, you must watch this play.

Winston’s history-erasing routine is interrupted by the oracles of O’Brien, a high-ranking Party member that Winston’s suspects is working against the system. Like a subtle but constant hum of a refrigerator, Winston gets the uneasy feeling that the game is rigged.

“Thought crime, from the pen of a dead man…” Winston writes in his black leather diary, as he vaguely hopes that his doomed words might be read by a emancipated future generation. But he doesn’t catch a break as the choking fog of authoritarianism steeps under his front door in the form of his neighbour’s pig-tailed children sporting slingshots and chanting “the war is on, the war is on”. A tragic reminder of the everlasting supply of brainwashed troops, which ominously parallels the countless child soldiers lost in one of the deadliest wars since WWII, the Iran-Iraq war.

The link between sexuality and political dissent is severed, as affection and loyalty are taken away from wives and husbands and rerouted to Big Brother by the banning of romance. In such a society where even the orgasm is on its way to being abolished by neurologists at the Ministry of Love, a  member of the “Anti-Sex League”, Julia, played by the devious Amy Hall-Cummings slips Winston a note reading, I love you. Winston immediately eats the sweaty piece of paper and a new hope is felt by the star-crossed pair as they make love in a lush, colourful forest at the end of weaving trails far from the haunting presence of the Party.

Momentarily evading the watchful eye of Big Brother, they rent out a room together above a junk-shop in the “warm-hearted Prole” (Proletariat) district of town. With fertile sounds of musical childhood chants of the marginalized minions below, the couple grip the one and only true product of their free will: their love for one another.

In the second act, the stage is set for the historic meeting with O’Brien (played by Andrew Wheeler), where Julia and Winston find out that they are not alone in their indestructible hatred of Big Brother. The plot thickens.

Thompson’s stage adaptation of this timeless time does justice to Orwell’s warning of the dangers of totalitarian control through language, psychological manipulation, misinformation, and technology.

The shows for this socially crucial “retro-futuristic” piece are almost all sold out, so book your tickets immediately at TheCultch.com to avoid disappointment. Please note that this show contains nudity, strong language and graphic depictions of violence.