Give violence a chance! 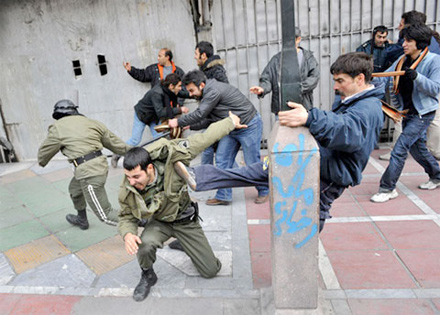 Strangest things can happen in your local Middle Eastern market in America. I was pushing my shopping cart down the aisle while glancing at fast-moving images of the Libyan uprising on CNN. A few Arab men had huddled around the TV, quietly watching as events unfolded.

As I turned my attention back to my shopping list, I noticed a Libyan acquaintance, standing by the pickle section, carefully studying the labels. Hoping for a quick getaway, I looked the other way and moved swiftly past him.

“You Persians are bunch of pussies,” the Libyan whispered.

“You Persians should learn to fight… like us. Haven’t you been watching TV? That’s how you fight a government… with courage,” The Libyan exclaimed.

“Well, we are trying to keep it non-violent…”

The Libyan interrupted and said, “oh, that’s right. I forgot. You are fighting the British Empire.”

Back in the car, I pondered over the conversation I had with the Libyan. I figured the man, in his crude, barbaric way, was trying to make an important point.

Nowadays, it’s hard to miss debates among diaspora Iranian intellectuals about justifications for non-violent resistance. While Arabs are grabbing all the headlines, the Iranian freedom movement has gone unnoticed by major western news organizations. This is not sitting well with Iranian experts in US and Europe whose five-minute TV spots on CNN, FOX, BBC and MSNBC have gone to their Arab counterparts.

Arabs are grabbing all the headlines for two simple reasons: They seem to be more engaged and aggressive in their fight against their governments (some as brutal as IRI) … and it’s good ratings for 24-hour news networks to show people who actually engage in street battles against heavily armed security forces. It happens that bravery is good TV.

While watching an Iranian satellite news program the other day, I heard the guest thanking Iranian demonstrators for their passive resistance and allowing security forces to attack and beat them. The guest applauded people for their “patience and tolerance.”

Flashing a big smile, the gentleman who, like you and me, is far removed from the action, told the host that, “legitimacy of the movement will be magnified when videos of brutal beatings surface on YouTube!” In a sense, the gentleman was proposing that as Iranian people get their asses handed to them, YouTube-watching nerds fall more and more in love with them! Well, this formula lost its usefulness a long time ago.

Iranian intellectuals don’t seem to understand the difference between acts of violence and self-defense. Every citizen of every country has a right to defend itself against brutality inflicted by its government. And those who discourage people from defending themselves against brutality are irresponsible.

A person who goes out in the street to demand her rights to free speech and equality (with no intentions of instigating destruction or mischief) should be allowed to defend herself against attacks by those who intent to cause bodily harm (notice I used “her” instead of “him” in the sentence because I believe that Iranian women have bigger balls than the men. But that’s a discussion for some other time).

Acts of self-defense bring order to chaos for people and chaos to order for the government. It brings people together for a common cause. It organizes masses and gives them purpose. The government thugs think twice before raising their hands on people. The officials fear people who are determined to defend themselves. People will start trusting each other again. The Iranian freedom movement will flourish and will gain the support of massive labor movement and lower middle class and the poor. Active resistance turns confusion to cohesion.

The news of university students assaulted by thugs will bring hundreds of thousands to the rescue. A woman harassed by security forces out in the street will unleash collective acts of self-defense by all those who witness the act. Passive resistance and standing on the sideline will give way to enthusiasm and active participation.

Make no mistake about it. Iranian people are no pushovers. The acts of self-defense displayed during last year’s Ashura demonstrations rattled the regime to the point of self-destruction. People’s resistance and street battles with security forces during that two-day period brought such disarray to the regime that Mousavi and Karroubi saw no alternative but to pull the rug from under people’s feet.

At the end of the day, the Iranian people need to answer this question: are we going to continue playing the role of sacrificial lamb for politicians who want to legitimize their questionable pasts or are we going to push back.

Now you perhaps are thinking here goes another expat sitting at home, telling the people inside of Iran what to do. And my answer to you is… yes I am.